Obama golfs while the 99% suffer

The following dramatization depicts scenes of chaos and despair. Reader discretion is advised.

I heard someone scream, "INCOMING!," and we dove into the nearest bunker for protection. One second, my friends and I are talking and smiling and enjoying the day. The next second all hell was breaking loose, as the incoming projectiles were crashing all around us. I peeked up to see my friend Mary curled up into the fetal position sobbing, "Why waa waa waa why?," as she rocked back and forth, seemingly to the rhythm of the reports all around her...

The above is a Chattering Teeth dramatization of...
A) A first hand account of Hamas terrorists perpetrating rocket attacks on innocent Israeli citizens.
B) President Obama warms up on the driving range before a round at an undisclosed golf course in the Washington area Friday with his "body man", scattering the pool of reporters with his miss hits.

The correct answer, of course, is "B", as Obama takes in his 30th time golfing this year and the 88th golf outing of his presidency.

Too bad the driving range is not covered by the new state-of-the-art First Divot Deflect System that blankets the actual course. Another stimulus is necessary to fund that degree of coverage.

Here's how it works
Obama's sporadic shots require an elaborate tree-based radar system that locates and measures golf ball location, speed, trajectory, atmospheric fluctuations and ball spin. This data is instantly transmitted via satellite to NASA, where their high-speed computers - normally used in tracking earth-threatening asteroids - are re-tasked to digest, compute and predict where the golf ball would land without diversion, taking into account the numerous expected golf cart and tree caroms.

A measured response is computed that will redirect the ball to the fairway, and the electronic instructions are instantly transmitted back to small fairway-lined air cannons. All of this needs to occur in such a way that will minimize the president's suspicion, since his narcissistic and arrogant personality requires that he truly believe he made these golf shots unassisted. 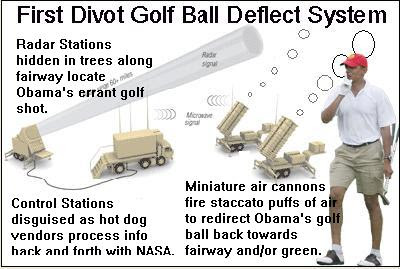 All of this high-tech hardware and software comes with a hefty taxpayer pricetag in the several $Trillions, a veritable bargain when you consider the cost to this country of a detached and bored Obama with time on his hands.

And now a word from our sponsor...
NEW from Chattering Teeth Toys! Electronic Obama Golf Game! 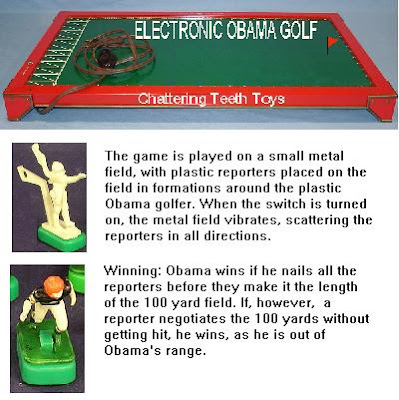