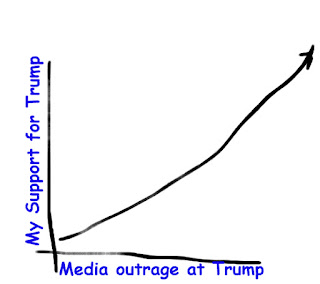 President Trump's (fill-in-the-blank) is nothing short of treasonous!

Trump's (fill-in-the-blank) was one of most disgraceful performances by a US President!


So the leftists are outraged at President Trump again, and I am supposed to care? 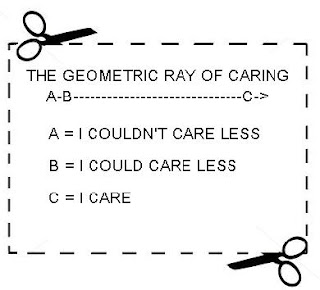 If the amount of caring about something could be quantified and categorized in degrees on a geometric ray displayed horizontally from left to right, whereby the left endpoint 'A' represents a total lack of empathy dedicated to a subject, and every successive point traveling to the right along the ray towards the arrowhead symbolizing infinity is a measureable increase in the amount of concern I feel
- I am never quite able to reach a "full capacity" of caring, as there is always a possibility for additional solicitude. If I were to declare, "I could care less" as my position on this ray for a certain topic, it would mean that I was dedicating some degree of burden, albeit potentially just an infinitesimal sliver('B'). If "I could care less", then by definition, "I care more than nothing". Maybe a lot more, in which case I could specify by stating "I could care tremendously less" which implies a simplified version as "I care"('C').

However,  with regards to the media and their "outrage at Trump" -  I am located at endpoint 'A', it means my level of "care" is a black void of total and utter indifference. That is to say that "I couldn't care less".

Tomorrow's lesson, a pie graph of "not giving a sh*t" and  "People who claim to give 110%". Please remember to bring your protractors. Class dismissed.
Posted by DaBlade at 7:43 AM