It's Groundhog Day and on the eve of the Iowa Caucuses, Bernie Sanders is the Democratic front runner.

When considering the Democrat 'big tent' circus coalition of clown jugglers and bearded women in attendance listening to him speak, you can see why.

Once in a lifetime, a masterful politician comes along with fresh, new ideas that will transform the human condition for the better. Bernie Sanders is not one of those politicians.

He is an old commie red who's ideas are not new, and in fact they have been tried repeatedly throughout history and resulting in utter horror, misery and death every single time.  In fact, they've even already been tried on our own shores. 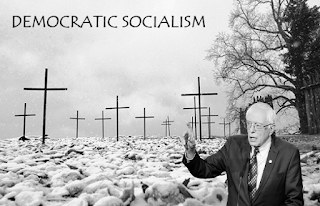 In the year 1607, three ships unloaded 105 men and boys establishing the first English settlement in North America known as the Jamestown colony. Think of them as the very first Berniebros. These pioneer Berniebros immediately implemented pillars of the socialist platform. Jamestown colony socialism - big difference!

Each bro was content in their belief that they had a human right to free health care. Medicare for all! Berniebros could fritter the day away in their private home libraries instead of doing that back-breaking hunting or gathering. College for all and no student loan debt! The colonists also used wood exclusively for their fires, so they were technically using 100 percent renewable energy. The first Green New Deal?

Workplace Democracy was also born. There was mandatory membership to a union, and all hunting and gathering had to be turned over to the State to pay for all the free stuff. Of course, we can assume preferential treatment was given to any pioneer who was gender-confused, identified as non-binary, genderqueer or in various stages of transitioning.

These practices resulted in almost all of the Berniebros dying in what has come to be known as “the starving time.”

Understandably, men who don’t benefit from their hard work tend not to work very hard.

Here they go again.
Posted by DaBlade at 7:11 AM