Do animals mourn? Do RINOs grieve? Is the Pope Catholic? 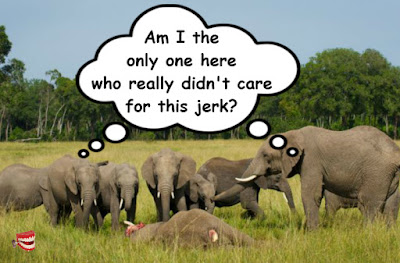 What happens when an old elephant dies?


Hypothetically speaking - I'ts not clear whether the over-sized daughter of the deceased uses the funeral as an occasion to bash a former rival bull of her father. On second thought, I doubt that. I'm guessing actual elephants in the animal kingdom probably keep it classy and instead focus on the celebration of the loved-ones life (even if the crusty old bastard elephant was an asshole).

Researchers also discovered that dolphins will visit and guard the body of one of their own for several days, pushing "at the carcass with their beaks and heads" with some even performing songs through a series of clicks and whistles, like the classic - "You Make Me Feel Like A Natural Bottlenose Dolphin."

It's not clear whether any dolphins use this occasion to trash the former rival bull of a recently deceased elephant. I doubt that. I'm guessing actual dolphins in the oceans probably keep it classy.

Crows also perform funeral rituals, diving and swooping and emitting calls that summon other birds. Researchers still have no idea whether an old, sick crow can foresee it's own impending death - and if so, plans it's own funeral as an opportunity to settle scores by not inviting any individuals in the flock it's diseased mind considers "wacko birds." If the dying crow was really sick and twisted, it might even not invite a loyal Alaskan magpie to dive and swoop at his rotting corpse just out of spite and to throw darts from beyond the grave.

Nah. Birds wouldn't harbor that degree of rancor and bitterness.

So do, in fact, animals actually mourn, or like human RINOS and democrats - do they simply fling their poo?
Posted by DaBlade at 8:34 AM