DID TRUMP DUMP ACOSTA OFF AT SAUDI CONSULATE? 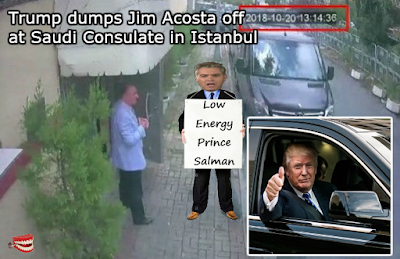 CHATTERING TEETH NEWS - Closed-circuit television footage shows a man thought to be CNN reporter Jim Acosta standing outside of the Saudi Consulate in Istanbul and wearing a sandwich board stating, "Low Energy Prince Salman". The man was heard pleading that the sign wasn't his, and that President Trump was actually responsible for the insult attempt against the Saudi Crown Prince.

This coincidentally also happens to be the last place that Saudi journalist and Washington Post contributor Jamal Khashoggi was last seen alive.  Turkish officials claim he was killed and dismembered by a Saudi hit team for being critical of the Kingdom.

We caught up with President Trump in downtown Istanbul at the McDonald's drive thru where he categorically denied the charges. Zip Ties were spotted in the back seat of his limo that matched those used to fasten Acosta's hands to the sandwich board sign and the bone saw from his belt loop.

Stay tuned to the CT Blog for important breaking news updates that will periodically appear here as news breaks and continues breaking... until it is completely broke.