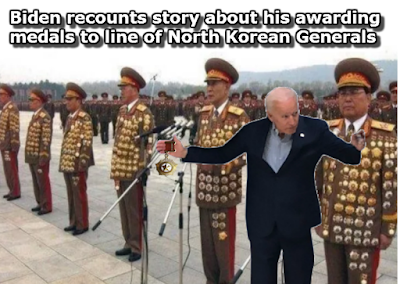 To one crowd, he says he traveled to godforsaken country of Kunar province in Afghanistan in order to pin a medal on a grieving Navy captain in recognition for his heroism.

In another, Biden tells how he bravely brushed off warnings from staff for a risky trip to Walmart in outskirts of Kabul in order to award medal to stock boy who rappelled down a stack of 60-foot shelving after retrieving a bulk-sized brick of toilet paper while under verbal fire from a sheep herder with the runs.

Joe's latest version has him recounting a peace-keeping mission to PingPong, North Korea, under invite from Gleatest Reader, Kim Jong-Un in order to pin several thousand medals on his current staff of Hundred-Star Generals in honor of them avoiding Kim's wrath for yet another week and having not been sent to a labor camp been or executed and fed to his dogs.

Snopes, the 'independent internet truth barometer', has rated this latest recount as a Mixture of truth and harmless misspeak.

What's False
Biden's story is not "false," as was widely reported, because his underlying recollection of pinning a medal on a grieving soldier who did not want the medal is based on a real occurrence, when as a boy in Scranton, Pennsylvania, he cried when he was blindfolded and couldn't successfully pin the tail on the donkey during his 10th Birthday party, and then shat himself in the process. 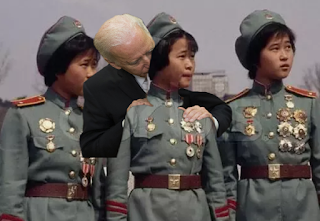