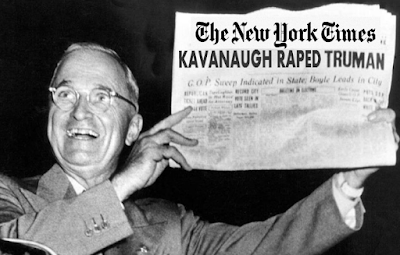 Chattering Teeth News - The New York Times latest explosive report claims that when Supreme Court Justice Brett Kavanaugh was still at Yale, he used a hot tub time machine from the basement of his frat house (and made from a car battery, jumper cables and spare beer kegger taps) to go back to November 2, 1948 and rape Harry S. Truman on the eve of his election.

Democrats immediately began calling for Kavanaugh's impeachment and removal from the high court after these baseless allegations.

The paper was forced to issue an update that included the significant detail that several friends of the alleged victim were exhumed and could not recall the purported sexual assault. The paper also had to admit that time travel was not yet possible, let alone in the 1980s when Brett was at Yale. However, they theorized that sometime in the distant future, time travel is likely, and that a future time traveler could potential go back to the 80s with a spare time machine for Brett to then use to go back to 1948.

When the NY Times was asked how this fake hit piece came to be published, a spokesperson for the paper claimed "friends pushed a pen into the hand of a female reporter and she has no memory of using these words."

The reporter herself used a Joe Biden gaffe as her defense, claiming that she came from a very poor background and therefore "heard 4 million words fewer spoken by the time she got there".

The alleged victim's desiccated corpse refused to be interviewed.