You can always tell when a supposed so-called 'news' site is really just a fake news, leftist, deep state, propaganda spin machine by the structure of their Headlines. Here's one from another obscure electronic rag called "bridgemi dot com".

Trump lashes out at Gov. Whitmer after critical coronavirus comments 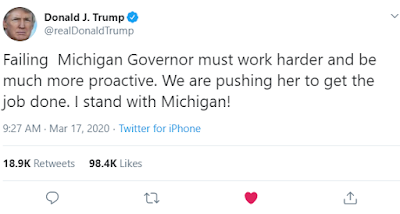 They always try to make it about Trump's counter punches. A more descriptive headline would have been:


Joe Biden has promised he will select a female VP candidate (whatever the heck that is any more), and apparently gWretchen self identifies as one of those (though I'm not convinced).
or this...

BTW, I know Rush Limbaugh designated Paul Begala, the former adviser to President Bill Clinton, as "The Forehead". But Begala is no longer in the game as far as I know, and my horrible, no good, very bad governor unfortunately is.
Posted by DaBlade at 7:36 AM