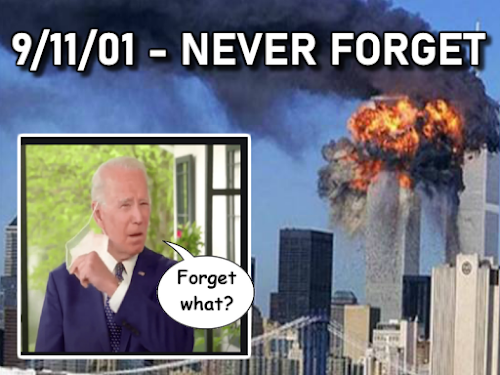 MEDIA GIANTS CALL BIDEN'S 9/11 MEMORIAL ADDRESS, "ONE FOR THE AGES!"

CNN's Jim Acosta Says, "This was Lunch Bucket Joe at his best - relating to the little people."

Here is an excerpt:

As long as I can remember, I will never forget. What we're we discussing? I want to be clear, I’m not going nuts. I’m not sure whether it was the Empire State Building or the Eiffel Tower...

I have the memory of an elephant... It was big and grey.

C'mon, man! Three million, billion lives lost on 9/11. Do you really feel safer under Donald Bush? Osama Bin Bama has taken this year, just since 9/11, has taken more than 100 years. Look, the lives, when you think about it, more lives this year than any other year for the past 100 years.