Now comes the case of the Mexican-born Ruben "the deported drug dealer" versus the United States.

PICTURED: Michelle Obama seems to have taken sides with the defense on this one. (Don't know the artist on this one, but nicely done!) 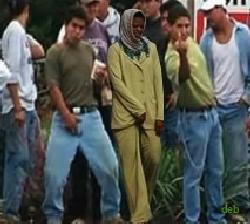 What is before the Supreme Court is whether or not this foreign-born dope smoker should be allowed to seal his birth records and claim he was born in Hawaii so he can begin his run for the presidency.


Quick Facts of the case:* Born in Tijuana in 1974 to unwed parents.
* His biological mother is Mexican and his then 16-year-old father is an American citizen.
* Raised by grandma and father in San Diego since he was 2 months old.
* Has been deported six times since then for drugs, only to sneak back across the border each time.
* Now he is claiming the immigration laws discriminate because it gives unwed mothers more rights than fathers.

Different rules for woman? I guess I'm OK with that. I always thought that an American woman's womb was like a U.S. embassy in foreign lands - you know... always considered U.S. soil. I just wish Michelle would keep her hands off her diplomatic pouch.
Posted by DaBlade at 8:37 AM