For me, Sparky Anderson was one of those larger-than-life celebrities in the "sports hero" category. He managed the Detroit Tigers from 1979 to 1995 and I have many warm memories of this man and his body of work. 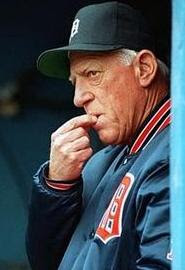 Let me put it this way. If I was shown an inkblot roughly in the shape of Sparky, I would think two things... First, I would associate his image with my memories of those great Tiger teams, especially that magical 1984 Championship season. I'll never forget that 35-5 start.

The other thing I'd think would be, "Why the heck am I being shown inkblots and can someone please loosen these restraints?"

Sparky was known for being (UNDERSTATEMENT ALERT!) quotable. A co-worker and I used to scan the sports section at our desk while the newspaper was still warm from the press, looking for any new quotes from this man that we would cut out for our "Sparkyisms" file. That file got pretty thick as I recall. Many of them are found here and there, but I know we had some unique ones I haven't seen since. I wonder if Barry still has that?

Anywho, gotta run. "Nurse! Can you change the channel now? The View is coming on!"

"People who live in the past generally are afraid to compete in the present. I've got my faults, but living in the past is not one of them. There's no future in it." - Sparky
Posted by DaBlade at 6:06 AM