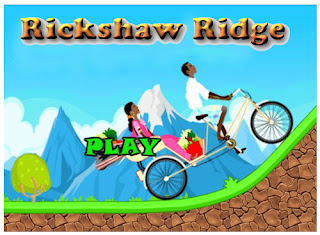 The story App of a conscientious objector who refused to vote for either of the two lifelong democrats from either party label. Unlike the true story (Hacksaw Ridge) of Pfc. Desmond T. Doss, who won the Congressional Medal of Honor despite refusing to bear arms during WWII on religious grounds - this blogger has no problems bearing an assortment of arms. However, he does object on religious grounds to support this country's corrupt political system and the illusion of choice any longer.

OBJECT OF GAME: load all of your possessions into the back of the rickshaw and make a break for it. Come back repeatedly to save as many as you can by transporting them to your oasis.

CHATTERING TEETH ISLAND NEWS BULLETIN: Now taking applications for citizenship to my island. Full disclosure, there will be no wealth redistribution, union thuggery, deficit entitlement spending, nor made-up rights to murder your baby. You will have to work for your coconuts. And as your fearless leader, I promise quick and speedy trials for all cop killers - followed closely by  public executions.
Posted by DaBlade at 7:20 AM