Is anyone surprized that Robert De Niro says ‘F— Trump’ at Tony Awards (while our president is in Singapore in advance of dangerous negotiations regarding NK nuclear weapons), and gets a standing ovation? What I found odd was that there was actually another Hollywood awards show. Do they have these every weekend now?

So Bob De Nada was apparently introducing fellow leftist commie Bruce Springsteen to perform a song. Did Samantha Bee open with her so-called comedy routine of c-word insults directed at our first lady? Was this followed up by Michael Moore reading poetry?

Think about this. This douchebag's Trump derangement routine was captured by scores of broadcast professionals on state=of-the-art cameras and microphones and relayed over multi-million dollar satellites in Geo synchronous orbit and over a vast network of underground fiber-optic cables to TV sets all over the globe and enjoyed by approximately 3 viewers. The majority of the rest of us were either watching the Food network or clipping our toe nails.

Well, at least the Hollywood audience of leftist communist progressive C----s and dumbf----s enjoyed it.

Fav comments from linked article (and only reason to even click it):
>>>F#@K DeNiro.

>>>and just like that, I am gong to vote Trump from this point on, I have always been a liberal and voted for Obama but these relentless nasty and vulgar attacks has made me sick of these celebs that continue to act like toddlers throwing tantrums. It is not classy and exasperating to hear day in and day out.

>>>De Niro doesn’t realize he will never be in a hit movie for the rest of his life. Never. 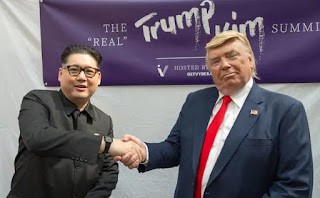