QUERY OF THE DAY: How many more celebrities and/or fashion designers must die by their own hand before I've actually ever heard of one of them?

SPORTS TIP: Lebron James and his sidekick Cavs lose this year's basketball trophy. The consolation prize invitation to the Waffle House has been rescinded because he won't just shut up and dribble the syrup. Go home, Lebron. You're dunked. 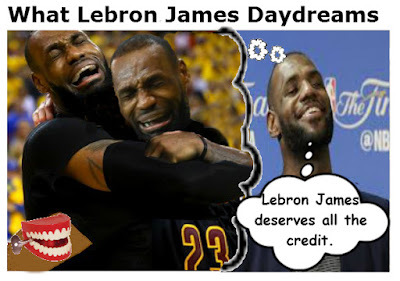 WHEN HEADLINES ATTACK!:
Gator sought after report of possible attack in Florida park

Gator "sought"? What an odd word to use in relation to a gator.
BOLO: Be On The Lookout for a reptile on the loose and reportedly wearing a hard leather-like hide, dark sunglasses and driving a 1971 Gremlin. He should be considered armed and dangerous.

TRUMP NEWS: Trump says he will ask NFL players who kneel during National Anthem for a list of those they feel should be pardoned and he will read their application. Way to call their bluff, Donald. I'm sure this was met with confused and vacant stares by these leftist America-hating kneel-baggers. This is the equivalent of Trump "pulling the chair" and watching them fall on their asses.

Sad news from Fox News commentator Charles Krauthammer stating he only has weeks to live. He would often frustrate me with his analysis as well as getting me to nod in agreement the next segment. A good man that will be missed when he's gone. When Joe Biden heard this, he shouted, "Stand up, Chuck! Stand up and let 'em see ya!"

LASTLY, THE RODMAN ADVANTAGE?
“I will be flying to Singapore for the historical Summit. I’ll give whatever support is needed to my friends, @realDonaldTrump and Marshall Kim Jong Un,” Rodman said in a Twitter post. 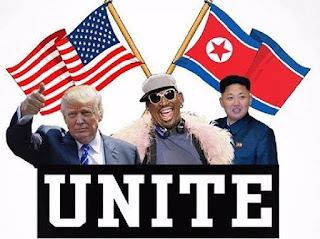 It's probably no surprize that I have a soft spot for Dennis (side margin) and that I will always give him the benefit of the doubt. Even if no progress is made, you have to tip your MAGA cap at his willingness to try. God Bless you Worm, and good luck!