This one is for my FB buddy Tom, who likes to call me 'stupid' or 'dumb' because I won't support Trump - and also for the rest of those who try to bludgeon a Trump vote by stating that not voting for Trump is like a vote for Hilery (sic), or that Trump is obviously better than Hilery (sic); or warning that if Hilery (sic) is elected, we will lose our country in 8 years (as if I can still recognize the country I'm currently blogging in); or my personal favorite: "(then) face the consequences of the future Supreme Court." (but why repeat myself). 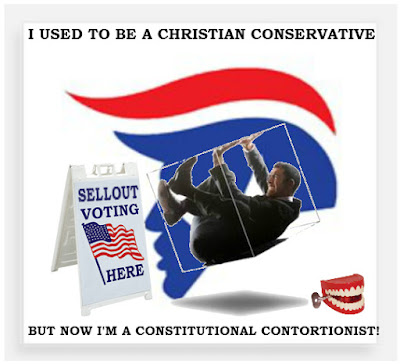 NEWSFLASH: If (when) Trump loses, it's his fault - and because he was the wrong candidate.

I know it's a popular argument from many trumpeters to state that if Trump loses, it's somehow my fault. I don't blame the cupcakes who never supported the only constitutional conservative during the primaries for finger-pointing. After all, your candidate is already positioning and leveraging himself for the loss.

Then again, Einstein and his chalkboard may have this all figured out. In conclusion, Hilery (sic) is a despicable human being and I would never vote for her. I certainly understand those of like-mind who plan to hold their nose and vote for somebody they determine to be less despicable than Hilery (sic). I respect their choice and pledge from here forward not to try to influence them to my camp of nevertrump - as long as they give me the same courtesy.
Posted by DaBlade at 8:39 AM 6 comments:

This Blog Means No Offense to the Capybaras

Massive rodents are taking over the Rio Olympic golf course 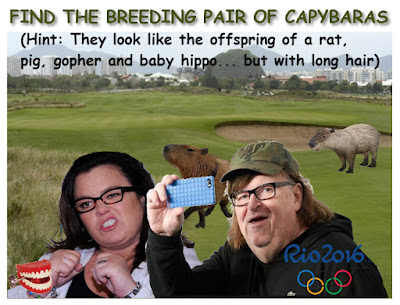 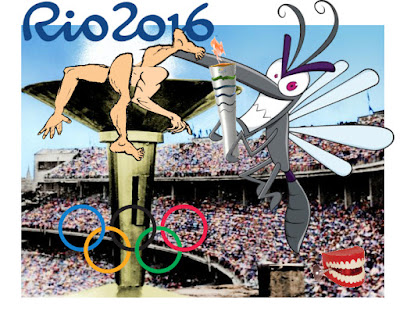 The 2016 Olympics in Rio de Janeiro officially got underway when a 200lb mosquito riddled with the Zika virus lit the Olympic Cauldron filled with the mutilated body parts that have been washing up on Copacabana Beach.

The proverbial bar has been raised regarding the pomp and circumstance that has been associated with these opening ceremonies, with the raucous music and synchronized dancing accentuated by audience participation with gunshots, knifings and other random acts of violence perpetrated against their foreign visitors.

This is a socialist's utopic wet dream of universal health care and abject poverty re-distribution. Never mind the waterways of Rio teeming with dangerous viruses, bacteria, turds and raw sewage. Pay no attention to the   mutilated bodies washing up on the volleyball beaches, or the stench from the numerous giant trash pits.

DISCLAIMER: Garbage is defined as any discarded item thrown out by a capitalist, including but not limited to worn or broken household items, leftover packaging, uneaten non-vegan foodstuffs, or other items resulting from capitalist consumption. Garbage DOES NOT include Earf-friendly items such as dirty drug needles, spent roaches, stacks of discarded and bloodied unwanted fetuses with severed spines, etc., and also the following: Any item purchased with any form of government transfer payment, including but not limited to Social Security, welfare, food stamps, unemployment compensation, etc.

And as for the mosquitos spreading the zika virus and causing birth defects and baby's heads to be 50% smaller than normal - you have to ask yourself: How big a brain do you really require to be a socialist progressive?

So the land isn't exactly disease-free. But just think how much worse the air and water quality would be if the green environmentalists and tree-hugging socialists weren't in charge.

The good news is that the television cameras should not broadcast any human rights or civil liberties violations, as the local impoverished have been booted to the hills and threatened to keep a low profile.

BREAKING: Due to the special challenges holding the Olympic games in Rio is proving to be, there have been some scheduling and games changes to take note as follows -

2) Beach volleyball will be replaced by the severed head bocce ball beach roll and shuffleboard.

3) All street marathons and race-walkers will be allowed either an AR-15, or a lighter, yet smaller capacity semi-automatic handgun - depending on what the participants believe they need to defend against the random roving gangs. Water stations will also have cups full of re-loads and additional ammo.

4) Lastly (for now), all Gymnastics competitions will involve projectile vomiting (due to the unavoidable violent illnesses from the water and air), and athletes will be judged on distance, vocalizations, creativity and artistry (i don't know. I'm making this up as I go)

And now for the opening ceremony song, performed by

Duran Duran
His name was Bruno and he washed up on Rio sand
Just like that river with his torso and severed hand.
And when he bloats he really shows you all he can
Oh Rio, Rio dance across this filthy land.