Only one way AOC will be comfortable making this choice.  That's right... 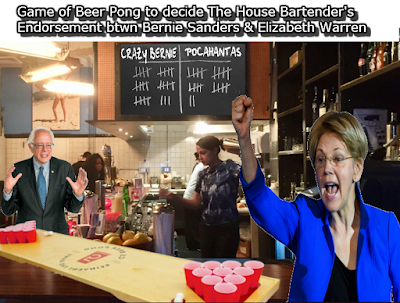 My money's on The Injun. I still remember fondly her beer Instagram candidacy announcement On New Year's Eve... "I'm gonna get me... ummm, a beer"

Now if she can only get the darn bottle open! 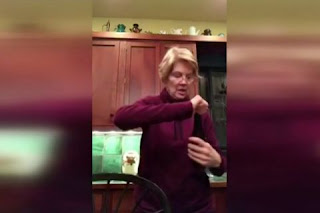 CAN YOU SPOT THE 2020 DEMOCRAT PRESIDENTIAL CANDIDATES IN THE IOWA MANURE PILE? 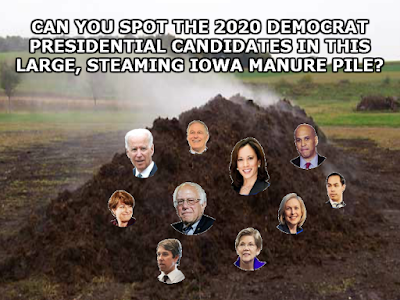 OK, admittedly that puzzle wasn't really fair as there is no real difference between these candidates and the background.

It's almost as unfair as expecting Creepy Joe to negotiate his way through a single-stalk Iowan corn maze. 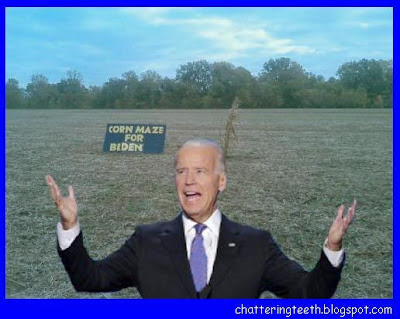 With this invasion of 19 looney dimocrat politicians, you can't blame the natives for seeking the nearest shelter... 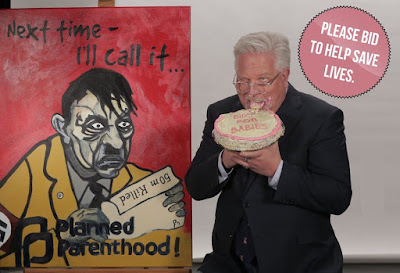 "ProgreSSives" are the same in any universe, and by any other name would be as morally corrupt.
Posted by DaBlade at 9:01 AM 6 comments:

So you really think you can be anything you want to be because you are entitled or something? 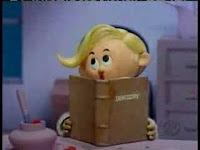 B) That children's show actor who thought he was a climatologist

c) That grown a$$ man who identified as a little girl 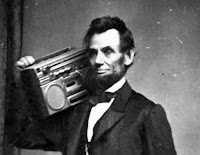 If you jumped into a time travel phone booth and was transported back to the 1990s and asked a bunch of elementary kids what they wanted to be when they grew up - most would almost certainly say they wanted to be Marine Biologists or an Astronaut. Oh sure, there would be the occasional weirdo who might state they wanted to some day be a pilot of an official Oscar Mayer Wienermobile, but that's just crazy talk. What are the odds of that?

The problem with the above answers, children, has to do with something called 'market forces' and 'supply and demand'.

Let's look at the numbers. Per the US Census Bureau, the estimated number of U.S. millennials in 2015 was 83.1 million. There are only approximately 8,520 Marine Biologists, and there has never been more than 150 astronauts at any given time. Looks like a few disappointed Johnnys and Sallys.

Oh yah? Well at least they can always be an Oscar Mayer Weinermobile pilot, right?.... Not so fast.

The number of applications to become “hotdoggers” has shot up to 7,000 in 2019, ... Oscar Mayer has a tradition dating back to 1988 where six Wienermobiles tour the U.S. and Canada throughout the year promoting the brand name processed meats, usually in crews of two — one male and one female — commandeering the giant-size fiberglass wiener vehicles... Lottery-winning candidates who get hired by Oscar Mayer go through two weeks of Hot Dog High, where they learn about the company and get driver training so they can adeptly steer the Wienermobile.


What? You mean there are no more than 12 “hotdoggers" (6 Pilots for the Wienermobiles and 6 Commander positions inside the giant-size fiberglass wiener vehicles) at an given time?

In conclusion, maybe the weiner-wannas should be more practicle while pursuing the Hot Dog High. A job that is in high demand and produces a product that flys off the shelves... say, a line worker at a trophy manufacturer? Or maybe a hot dog vendor at the local The Home Depot?

Speaking of which, here are some critically acclaimed clips from my interview with just such a vendor a few years back who clearly wasted her money getting loans to go to Hot Dog High...

The wife and I stopped by the local Home Depot after church yesterday to buy a power washer, deck stain and assorted rollers and accessories. Apparently, my wife believes that Memorial Day weekend is meant to be spent in hard labor around the homestead. I reminded her that the day is set aside to remember those who gave the ultimate sacrifice for our freedoms, and "how am I supposed to do that while working?" She reminded me that weekends squandered in leisure is not considered an 'ultimate sacrifice', and to "quit yer whining!"

So there I was, pushing the cart of goodies toward the exit just past the hot dog vendor. The misses must have been feeling some fraction of guilt for the lash marks on my back, as she nodded at the hot dog vendor while telling me, "go ahead".

The peddler and purveyor of these plump and prodigious redhots was a young female working alone. Apparently, she was expected to multitask as the chef AND the cashier. I placed my order for a hot dog.

I should have known she was not fully trained when she asked, "What kind? A regular hot dog or a Vienna?"

I was momentarily confused and felt slight vertigo by her question, and wondered if I mistakenly used my fake French accent when placing my order - thereby throwing her off and eliciting her question. I shook off my momentary fugue, and answered in my very best Flint accent, "Vienna, daaaaang girl!"

While she was 'preparing' my post-Home Depot feast, I engaged her in a palaver of verbal confabulation for my own amusement. "I'm sure you are aware, madame - as you are in the business so to speak - that Merriam-Webster just recently declared by decree that the hot dog shall henceforth be considered a sandwich. How does this make you feel?"

She giggled and said she had not heard this and she didn't care one way or the other.

I searched her eyes and face for tics or other tells that might suggest a lack of veracity or that she might somehow be involved in this conspiracy. Finding none, I determined that she really hadn't read or heard about this frankfurter travesty of justice. This immediately enraged me. How can Home Depot enlist a hot dog vendor who doesn't keep up on the very latest hot dog news!?

Calling a hot dog a sandwich? You might as well say the Earth is flat! or that anthropogenic Global Warming is a thing!

I slathered a healthy portion of mustard and onions on my vienna and stormed through the exit, mumbling unintellibles all the way to the car.

So in conclusion, a hot dog may be a sandwich, but it will never be a sammich!