My Trip to the Gas Station

I was called to sub first grade today and needed to stop at the gas station on the way. the needle was on red, a lifelong habit that used to bug my father, who wisely always told me...

"Gas costs the same whether you keep the tank empty or keep it full."

Obviously he never took into account the extra miles I have "enjoyed" over the years with the strategy of coasting for a bonus quarter mile after the last combustible fume has been consumed. While no official log exists, I'm sure that if these quarter mile gas-less jaunts were stretched end-to-end, I have earned the equivalent of an extra road trip to the Mackinaw Bridge. The question plaguing me this morning was whether my ongoing fictitious coasting trip would inch me closer toward St. Ignace.

Arriving at the corner gas station, a mere couple of blocks from home without running out of fuel was a splendid surprise, and what I hoped to be a good omen of good fortune for the rest of the day. I pulled my high-mileage 12-year-old, dented, formerly white (but now trimmed in rust) Oldsmobile Intrigue neatly into the parking lot and nestled comfortably up to pump #8, oily black smoke spewing from the tailpipe as I shut it down.

I should mention here that my car gets really sucky gas mileage comparable to the M1 Abrams tank, but with less firepower. I adopted the habit of answering the question, "what kind of mileage does she get?" with a "gallons per mile".

Now, I like to have some chewing gum when I sub first grade to save chewing on my nails (or exposed necks of overly rambunctious 7-year-olds). I decided to go inside and prepay for the pack of gum and my gas... $30 bucks should do it.

Returning to my vehicle, I began to gas up. No sooner did I squeeze the handle when the pump went into super slo mo speed. Great! I don't really want to be late! I remember thinking that it would take a while to reach $30, when suddenly the pumped stopped. I looked at the display and it read exactly $3 dollars even.

I quickly discarded the possibility of a pump malfunction and instead assumed the cashier mistakenly dropped a zero and keyed in my $30 purchase as $3 when programming the pump. Just to verify, I pulled the crumbled receipt from my front pocket, sure I would see "Gum: $1.70, Gas: $30.00". But that's not what I saw at all. It read "...Gas: $3".

My brain synapses went into super slo mo as I tried to mentally process the information. What could she have possibly been thinking selling me $3 worth of gas? Even if I had misspoke (which I didn't) shouldn't such a miniscule fuel purchase request spur an obligatory confirmation from even the dullest of cashiers? Granted, there are times when my appearance should lead one to question my ability to afford more than a $3 purchase, but I was wearing a crisp, white dress shirt, tie and dress pants. I HAD EVEN SHAVED!

My vehicle was clearly visible through the large picture glass window from the register, so it was obvious I was not buying gas for a gas can. Even so, I'm guessing most people who use a small one gallon can will usually slurge the extra 70 cents and fill the thing up.

The cashier lady sold me $3 worth of gas without blinking her vacant eyes once!

Maybe the better question isn't what was she thinking. Rather, what did she think I was thinking? Here were the only choices I could come up with.

A) Well, I know I just filled up at pump #1, but I have travelled several rotations of my tires since then, so I'd better top it off at #8 before I leave.

B) You are a keen and insightful cashier. Thank you for not questioning my miniscule fuel purchase, as you have no idea WHERE my desired destination lies. As a matter of fact, I'm only interested in rounding the corner and traveling a hundred acres or so. After that, who knows? I really don't like to plan that far ahead.

I received my drivers license in 1977, a time when the average price of a gallon of regular unleaded gasoline was $.66. Back then, $3 would get you over 4 and a half gallons. This was a time when an individual didn't need to tally the value of the gas in the tanks of the idle vehicles in their driveway when computing net worth.
Posted by DaBlade at 5:39 PM 2 comments: 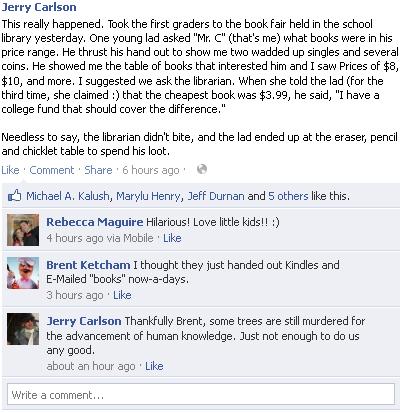