Rare behind-the-scenes footage of Pelosi's delegation being forced to de-plane just prior to takeoff..

First, our great President, Mr Donald J Trump, delivered a much overdue address to the nation from the Oval Office pitching to the American public the need for funding the border wall. Next came the response from Pelosi and Schumer. I had no intention of watching it...

but just as I was reaching for the TV remote,  there they were...  the camera begins to pan in on two macabre figures behind some kind of torture podium... "are these demons from the depths of hell?," I ponder... shivers down my spine, I begin to tremble... I try to scream as the figures now fill my screen and the plastic faced apparition begins to speak..
finally I find my voice... REDRUM!!! 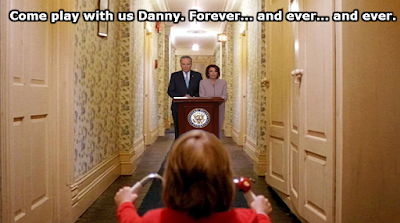 Pelosi and Schumer's response was even mocked on social media.

HERE'S NANCY AND CHUCK! now that'll give ya nightmares.

will somebody give Schumer a toy train to play with, and maybe an extra dose of powder on the massive forehead, as my my large, flat screen LED is being taxed to it's limits...
Posted by DaBlade at 7:02 AM 3 comments: 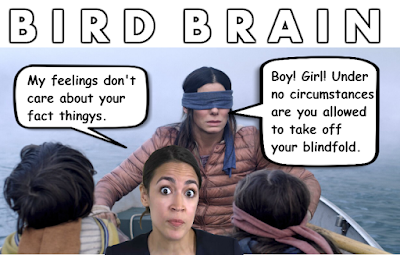 Actually, Democrat socialist bird brain Alexandria Ocasio-Cortez did not say that.  She actually said, "I think that there’s a lot of people more concerned about being precisely, factually, and semantically correct than about being morally right." There. Doesn't that sound a lot more eloquent?

You've watched Bird Box, right? According to Netflix metrics, 45 million subscribers did. Of course, these tools are no doubt counting my wife in that tally, and she only made it to about the 10 minute mark. I am a little more easily amused (and entertained) so I pried my eyes open until the bitter end.

One of the more memorable quotes from Sandra Bullock's character,

which is what parents of college bound children should be screaming these days. 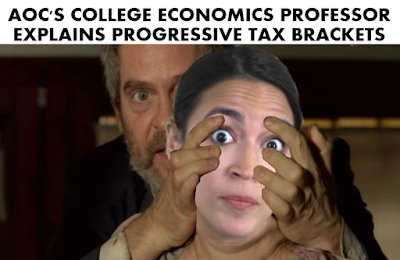