New this fall on Al Jazeera TV, it's the new comedy, "Sh*t My Teacher Says".
You'll laugh uproariously at the off-the-cuff quips and mindless drivel from cantankerous old Elementary teacher "Mrs. Hezbollah," played by longtime White House correspondent Helen Thomas. It's non-stop hilarity in season one's pilot episode, when the ancient and kindly Mrs. Hezbollah fills her students with revisionist history, while at the same time advocating the benefits of religious cleansing.

MRS. HEZBOLLAH: Tell the Jews to get the hell out of Palestine. The Palestinian people are occupied and it’s their land. The Israelis should go home to Poland, Germany, America and everywhere else. 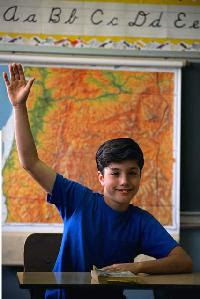 STUDENT: My dad says there has never been a land known as Palestine, and therefore there is no such thing as a Palestinian people, language or culture, and that the Jewish people have thousands of years of history in the land of Israel. By the way, isn't today's lecture supposed to be about the American Indian?

MRS. HEZBOLLAH: Tell the Americans to get the hell out of North America. The American Indian people are occupied and it’s their land. U.S. citizens should go home to England, Europe and everywhere else. Except for the illegal Mexican immigrants. They can stay.

STUDENT: My dad says that Homo erectus immigrated out of Africa about a million years ago. Would you have them return?

Hey Obama! You're soaking in it! 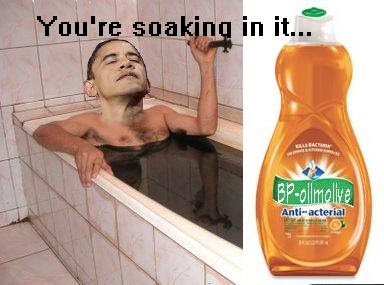 Listen to Madge the busybody's reasons for becoming a manicurist in this old Palmolive commercial. This is the exact same answer Obama could give for wanting to become president (if he were honest).

"Palmolive softens your hands while you do the dishes."

Let's change that up to read...

"BP-oilmolive destroys your coastline while you give your speeches."
Posted by DaBlade at 9:46 AM 5 comments:

I'VE GOT A SPECIAL PURPOSE!

HAHA! My letter from Steve Martin made Letters of Note! I'm SOMEBODY NOW!
Posted by DaBlade at 9:37 PM 1 comment:

The leak responsible for gushing 800,000 gallons of oil a day into the Gulf of Mexico has finally been plugged with Obama's used teleprompters!

Scientists had been scrambling to find a material that would effectively plug this gaping maw (the hole in the seabed, not Obama's pie hole) in a tactic known as a Top Kill. Heavy mud, cement, tire shards and even golf balls have been tried, yet to no avail.

"The problem was the pressure of oil and gas escaping from the well was simply too powerful to overcome with these materials," explained Phil McCraken, a BP engineer. "That's when I started to brainstorm for a material that possesses it's own blowback pressure... something that not only defies logic, but also repels it. That's when I had the Eureka! moment."

Engineers believe that the oil flow is staved off by a continuous flow of rhetorical flourish emminating from the teleprompters, acting like a sort of force field and containing the hole. Meanwhile, the drilling of relief wells are expected to be completed by August, putting an end to this sad chapter of America's second worst man-made disaster.

White House Press Secretary Robert Gibbs says President Obama has no comment. In fact, Obama will have no more comments on anything until engineers complete the construction of a "relief teleprompter" in a few days. Sadly, we will have to wait for the next presidential election in 2012 to finally put to rest this administration and America's worst ever man-made disaster.

Pictured: Obama is speechless as he examines a piece of broken teleprompter that had washed ashore. 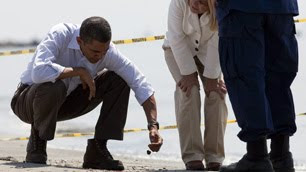