So I watched the debate on TV last night between that portly and bombastic man and that woman whom I shall not name who shared the stage with him. It was obvious to me from the spirited back-and-forth that she was lost in this great man's shadow, having much less experience in entertainment TV.

I know that some folks watching this debate sided with the man while some sided with the woman simply because they shared their genitalia type. I took no sides, and instead contented myself with belly laughs and snorts after every outlandish utterance of fake dialog. No laugh track necessary!

From what I could gather, the man's main beef was that he had spent the last 30-some years actually working and earning an honest living, while she spent all that time selfishly thinking about herself and setting up everything in her sphere of influence just to benefit herself.

From her perspective, she didn't deny his charges, but tried to make the case that she was much better at making the important decisions than he was.

While the debate was contentious at times, it was obvious these two really loved each other and actually wanted exactly the same things.

So that is my recap of "Sleep Disorder", the title of the second episode of the new comedy TV series, Kevin Can Wait, starring Kevin James and Erinn Hayes as his TV wife.

I'm quite sure there will be more hillarity and hijinks next week. 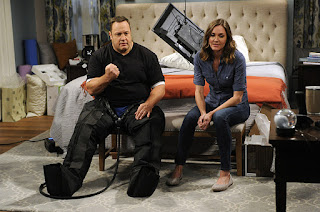 As for the 9PM hour immediately following, I thought I was watching a repeat - but instead was the presidential debate between the protectionist populist progressive Trump and Hilery (sic).

While the debate was contentious at times, it was obvious these two really loved each other and actually wanted exactly the same things.

The joke is on us in that one.
Posted by DaBlade at 7:55 AM No comments:

And what is Chelsea? OK, Got iit! 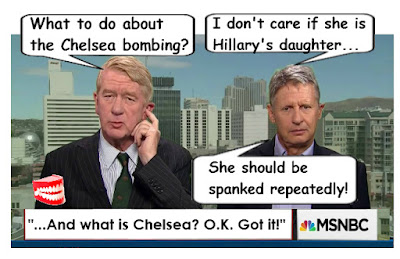 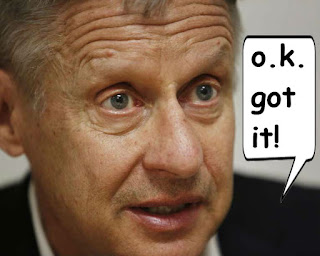 Obama: Would be 'personal insult' to legacy if black voters don't back Clinton


OBAMA: If I hear anybody saying their vote does not matter, that it doesn't matter who we elect -- read up on your history. Or weren't you educated in a muslim Indonesian Madrassa?

Barack so stupid, If he had a brain he'd take it out and play with it.

I will consider it a personal insult -- an insult to my legacy if those with my particular shade of skin melons and genetic blend do not support that old and tottering racist white biotch.

...as an outsider, what's your view of the human race?

Let me be clear. I need all of my bruthas and sistas who are also half white and half Kenyan to put down their bongs for an hour - get a ride to the polls and vote a few times for Hillary.

... mouth is moving, words are coming out, this is never good!

Hey Barack! You'll never be the man Michelle is!

By the way, there's an extra spring in my step tonight. I don't know about you guys, but I am so relieved that the whole 'birther' thing is over.

Yo mama's doctor called with her colonoscopy results. Good news – they found your head!

END TRANSCRIPT
Posted by DaBlade at 8:11 AM 2 comments:

So you want to be a Hillary Handler? Do you believe you have what it takes?

We here at the Hillary Handler Training Academy take your training very seriously. The Academy is located in a sprawling underground campus hidden under Chelsea's house (with a fully staffed hospital). After successfully completing this 6-week course consisting of a combination of classroom and grueling obstacle course work, you will have the following skills:

* Ninja-like ability to be camouflaged in plain sight - the ability to always be within proximity of "the subject" and ready to assist at a moment's notice, but out-of-the-way and not immediately noticeable to others in the crowded groupings.

* Magician-like skills and ability to appear out of nowhere to surreptitiously administer booster shots to "the subject" of whatever is needed at the time from a concealed-carry syringe and vials of various medications for strokes & seizures - but all labeled for "allergies".

* Fireman-like strength and ability to catch the subject after a sudden collapse and to deadlift and drag the subject into the waiting and idling van in such a way as to make it appear the subject is still conscious and animated under their own power. 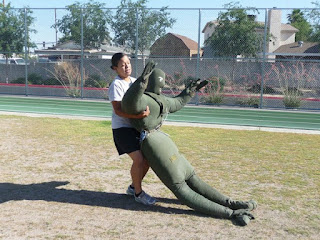 * NASCAR-like driving abilities in case the regular driver suffers an accidental ashtray throw from the back seat to his temple. (we here at the Hillary Handler Training Academy believe in cross-training our HH Agents) 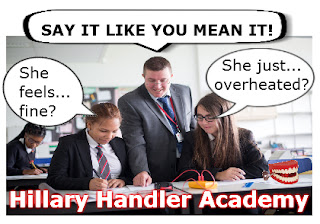 Those with family, friends, neighbors or loved ones who would otherwise notice their eventual permanent disappearance need not apply.
Posted by DaBlade at 7:52 AM 1 comment: 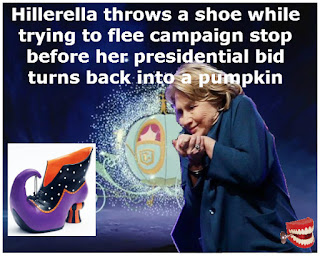 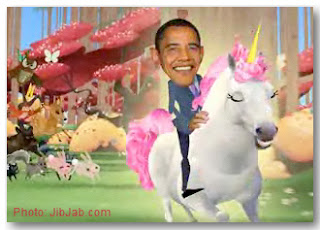 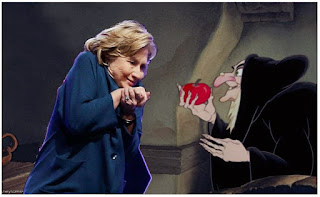