My trip to ALDI

First, let me just say to all the folks with steady work who refuse to sacrifice taste for a pocket full of Lincolns, there is a new playa in the "Miracle Whip vs Mayo" debate, and its name is Aldi's Whipped Salad Dressing. (yes,Lincolns=pennies). You hardly notice the difference when smothering your olive loaf baby! A wince is a wince.

But let me start at the beginning.

My wife asked me to pick up "a few things" at ALDI the other day while she was at work. I'm sure she assumed it was a benign request and that I would accomplish this seemingly simple task without drama, injury or blog fodder. She should know better by now.

While these requests have become rarer over the years, Mrs. DaBlade has learned that I don't do well with spoken lists. Apparently, a one gallon family-sized drum of Boston's Baked Beans can not be easily substituted for a 10.5 oz can of Campbell's Bean Soup. Therefore, as a concession to my verbal grocery list dyslexia, she now will text me a list of the items for easy retrieval, as I stand in the wrong aisle looking like a lost toddler at the zoo.

If only she had a cell phone.

So, it was with unwarranted confidence and naiveté that found me pulling into Aldis parking lot. What could go wrong, right?

The first thing I noticed was the absence of grocery carts strewn about the lot haphazardly and taking up available spaces. Fantastic! The last thing I need to worry about is for some pilotless and wind-powered grocery cart with a lazy wheel, sailing zigzag patterns across the lot only to crash into my 12-year-old, dented, formerly white (but now trimmed in rust) Oldsmobile Intrigue. I'm not sure it could handle the impact and retain it's already razor-thin margin of road viability, so one less thing. 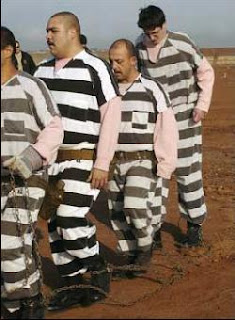 I located the carts lined up next to the entrance and quickly discovered why there were no ghost ships sailing the lot harbor. The carts were chained together like so many prison workers being lined up for a leisurely afternoon of busting rocks. Spot on. This was absolutely the best visual I needed to begin my shopping experience.

Part of the ALDI experience is enjoying all of the money-saving rituals that come with smarter shopping. ALDI regulars have come to find our easy-to-use shopping cart deposit system downright endearing, figuring that paying too much is a much greater inconvenience. With this system, we don’t have to assign an employee to round up carts in the parking lot, we don’t lose expensive carts, and you don’t have to worry about dings in your car doors from runaway carts.

Had I read this prior to my quest, I would have endearingly brought along a quarter to release the next cart in line (which I endearingly dubbed, "Kunta Kinte"), but instead, I just stood there with a perplexed look on my face while endearingly displaying my Hoover flags (out-turned and empty pockets).

Without the benefit of advanced research, I quickly understood that this store engaged in "money-saving rituals", and I was proud that I was saving a dime or two on my grocery bill at the expense of some young, part-time and minimum wage cart rounder-upper punk. With a shrug of the shoulders and upturned palms, I gave Kunta Kinte a sad look and proceeded into the store.

I was quickly relieved to learn that "money-saving rituals" did NOT include having to bring your own torch, lantern or flashlight, and that the store was aglow with the miracle of electric lighting. Such oppulence! I put away my lighter while thinking to myself, "you're gonna have to pay for this illuminence SOMEHOW mister!"

The next thing I noticed as I entered the store was a lack of directional choices. I felt like Duke Nukem in the original platform video game, as there was only one narrow aisle leading to the back of the store with no available deviations and pesky shortcuts to distract me. This was fine by me, because in order for a shortcut to be effective you need to know where you are supposed to end up. I knew I had to ultimately get to the Boss level (cashier), but first I had to "level up" (accumulate required goods). Well, as Duke would say, "It's time to kick ass and chew bubble gum. And I'm all out of gum."

I decided to check my wife's text message as I stood just inside the entrance, remembering only that it was a relatively short list. Hey, if the items can fit on my cell phone, I'm sure I won't need the luxury of a grocery cart, right?

Let's see, a gallon of milk... a box of spaghetti... a couple cans of mushroom soup... a can of coffee

Whoa! I was visualizing having to carry these items through the store as I read them off, and I wasn't concerned until I got to the end of the list. Water! Just my luck that I married a woman with an aversion to sulpher-tasting, arsenic-laden well water. Hmmm. Tying up one arm with a 24-case of water while balancing the other items in the other might be tricky.

I contemplated getting change from the cashier, going back outside and freeing Mr. Kinte after all. I discarded the notion, realizing this would necessitate negotiating the entire store maze twice. This is, after all, a lesson in economy of motion as well as minimizing the grocery bill. I looked at the 7-foot wall of product separating me from the cashier and briefly considered climbing over the puffy bags labeled "Chips of Potato" (apparently, generic brands are also money-saving rituals that are downright endearing to smart shoppers), but I had no idea what product was stacked on the other side. The layout so far made no ryhme-nor-reason to me, and I imagined the store manager interrogating me late into the evening, "Once again sir, please tell me how you ended up inside the lobster tank?"

Remembering that water is made up of hydrogen and oxygen molecules, both relatively light elements on the Periodic Table, I began my quest sans grocery cart. I forced myself to look at every display, as I had no idea where to find my items. Other stores foolishly hang expensive numbered signs above each aisle with a list of items found there. Such oppulence unnecessary for the smart shopper! Somebody is paying for those fancy lights and water fountains in Vegas, but it sho ain't us ALDI folk. I learned in past outings that these signs can give a false sense of security, as not every item available in the store is actually listed there. At least there would be no mental gymnastics on my part, having to categorize my list by "Animal, Vegetable or Mineral".

I made it to the end of the first row and caught a glimpse of an unshaven and disheveled gentleman with dark circles under his blood-stained eyes, stumbling along in a lost and unsteady gait, but then I realized I was looking at my own reflection in the glass door of the "Frozen Cream of Ice" section.

Moving on, I gathered up my items as I came across them, saving the case of water for last. I had the choice between "Spring Water" and "Filtered Water", and opted for the filtered. Not only was I saving a dime or so, but it wasn't clear from the labeling if the spring water was also filtered. Hey! Who needs beaver fever, am I right?

Grasping the milk jug by the handle with my left hand, I tucked the spaghetti and the cans of coffee and soups under that arm, then grabbed through the cutout plastic handhold of the water case with my right. As I trudged toward the Boss level suspending the water case, the individual bottles of water began to shift like a net full of monkeys caught in a snare net in an escape attempt. The .00001 mil rate of the plastic began to stretch and tear in a downright endearing fashion, as I counted my steps to the cashier, and what I thought was "home free".

I made it! I stacked my items on the conveyor, which I assumed was automated by a cashier-powered foot pedal. As she rang each item up, she placed them in a cart behind her and she gave me a look that said, "that cart stays right here buddy!" Then I looked along the wall. I haven't seen so many pajama-clad folks bagging items at a work table since the last time I was in a newspaper distribution center.

It was clear to me then that - since I didn't bring my own bags, boxes and/or fanny pacs from home - I would be making the long walk to my car. Kunta Kinte snickered at me all the way.
Posted by DaBlade at 2:04 PM