Lessons from a Flintstone

Flintstones take a certain weird pride in our hometown's "down and dirty" reputation. We believe, by virtue of being born here, that we are somehow more street-wise and tougher than you.

As I've mentioned before, I didn't exactly grow up on the mean streets of Flint. In the south end, the only crack I was exposed to were those in the sidewalks of my paper route. However, even those of us Flintoids who were somewhat sheltered growing up in a middle-class neighborhood and attending Catholic schools, we couldn't help but eventually learning some hard life's lessons Flint had to offer.

For those of you not from here, I'd like to offer a few survival skills I learned the hard way. 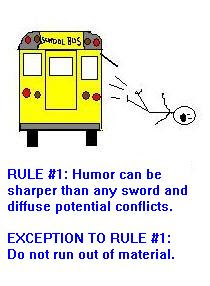 Yes, I really was thrown out of the back window of a school bus by an upper-classman because I ran out of jokes. Ain't that tough enough? Have you ever heard of this happening anywhere else? I didn't think so. 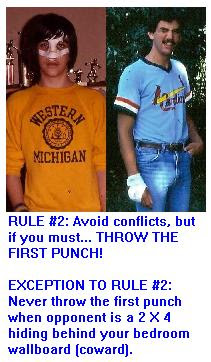 I learned the hard way that conflicts rarely escalate slowly and deliberately. Prior to the face cast, I always thought a fight couldn't break out until each combatant expressed their intentions. Maybe first there would be a volley of "yo mama" insults, as each sized up the other. This process would allow for numerous exits for the perceived weaker combatant to yield. After all, a bruised honor never requires plastic surgery. Imagine my surprise when I learned that all those steps could be ignored with one unannounced sucker punch, and that one second you could be running across the field playing keep-away during 8th grade recess at Holy Redeemer, and the next instant finding yourself coming to and staring up at the face of a terrified nun.

It was then that I decided to try and avoid fighting as I didn't enjoy hospitals nor vomiting blood. However, if it was going to come to fisticuffs, I would throw the first punch next time. It was a strategy I employed to my benefit a few years later, ending my fisticuffs career (hopefully) with a record of 3-2.

NOTE (regarding exception to rule 2): 2X4s are actually 1.5 inches wide and typically spaced every 16 inches in the framework of walls, taking up about 8% of the total space behind the drywall. Therefore, a randomly hammered nail has a 92% chance of finding hollow wall. If you use an electronic stud-finder and clearly mark the stud's location, I've found the odds of my next nail finding said stud is about 90% (10% less than a random right cross). 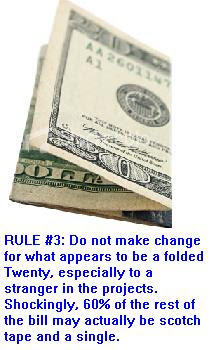 Before you ask the obvious, my job required my presence in the projects. I kept that faux-$20 in my desk to remind myself the cost of being gullible. When my job required delivering an open route in the projects, I learned to take a couple extra packs of smokes with me. I would paste an idiotic smile on my face and pass out single cigarretes to anyone who looked at me cross-eyed as I hurriedly made the rounds. Hey, it worked!

Those were some of the lessons I learned the hard way. I'm from Flint... so RESPECT, yo!
Posted by DaBlade at 11:16 AM