First, I'd like to offer my congratulations to the Green Bay Packers (or is it Packards?) for their impressive victory over the "Stelers". 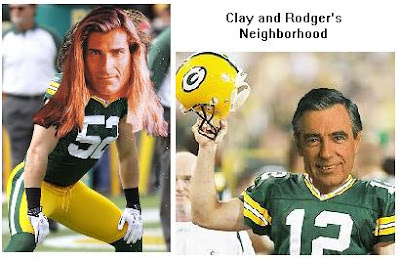 Having lived and worked in Wisconsin over the past summer - only a cheese brick's throw away from Lambeau Field - I take special credit for this victory, having moved back to Michigan in the fall and thereby paving the way for the Pack to grab the Vince Lombardi Trophy. Since I am convinced that the world revolves around me, I do not find a coincidence in the Detroit Lion's annual football woes and my presence in this state. You're welcome, my Wisconsin brothers and sisters.

Much is being said regarding Christina Aguilara botching the National Anthem. While sad and unforgivable, one would have to admit that her version was at least slightly better than Roseanne's.

CHATTERING TEETH EXCLUSIVE!: Transcript of Christina Aguilara's bizarre Anthem
Oh, say, can you see, by the dawn's early light,
Hormones racing at the speed of light
What so proudly we hail'd at the twilight's last gleaming?
But that don't mean it's gotta be tonight
Whose broad stripes and bright stars, If you wanna be with me, baby there's a price to pay,
O'er the ramparts we watch'd, I'm a genie in a bottle.
And the rockets' red glare, the bombs bursting in air Baby, baby, baby,
Gave proof thro' the night you gotta rub me the right way.
O say, does that star-spangled banner yet wave
I'm a genie in a bottle baby, come, come, come, on and let me out

I only wish that Snickers would have seen fit to include Aguilara in the log hit.

What would have made this commercial even "awesomer"? A John Madden telestrating this exchange with circles and graphs and President Bush vomiting in Madden's lap... and maybe a devastating log hit taking out Diaz and ARod.

Finally, what did you think of the Black Eyed Peas halftime show? Had I been consulted in the planning stages, I would have insisted that Axl Rose join Slash on stage to sing Sweet Child o' Mine instead of the Pea's Fergie, conditioned on Axl agreeing to be auto-tuned. Now THAT would have caused a bigger spike in beer sales than any other beer ad that ran.

I will say that I dug the costumes and have already completed my own version using Christmas tubelights and an old bicycle helmet, complete with flashing strobes. I am now ready to attend my neice's March wedding in style.
Posted by DaBlade at 8:55 AM