Please forward all my calls to the pool noodles 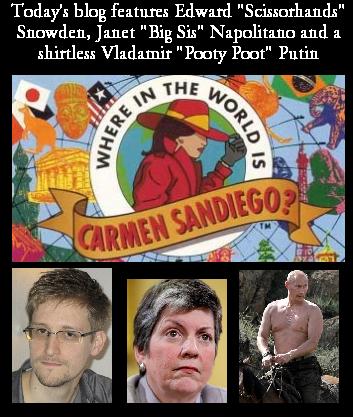 Somewhere in the world...
* NSA whistle-blowing Edward Snowden is hiding out and on the run because he had the audacity to shine a disinfecting floodlight on obama's sponsored warrant-less surveillance practices perpetrated against average American citizens.

* Earlier this week came the surprise announcement that Homeland Security chief Janet "Big Sis" Napolitano would be vacating her post so she could spend more time working on her manly linebacker body frame and perfecting her butch salt 'n peppa hairdoo.

OK, that isn't really the official cover story for her leaving (I forget this lie). But with Snowden hiding out in A Russian Airport Terminal and Janet "Big Sis" Napolitano 'retiring... do they REALLY want me to believe these two stories are just a COINCIDENCE???

PUH LEEZE! If I wanted to send a super secret spy to a Russian Airport Terminal to check the male bathroom stalls without drawing undue attention from the Politburo, WHO BETTER than the Big Sis? In the unlikely event she were to be captured in her search for Snowden and thrown at the feet of a shirtless Putin for questioning, who better than she to take him down?

* Meanwhile, George "White Hispanic" Zimmerman is spending Day One a free man, but likely on the run and in hiding due to the numerous death threats he has received from the tolerant progressives.

George - If I may offer you some advice on how to remain anonymous and undiscovered? Forget the Russian airport terminal bathroom stall hiding place scenario (as attractive as that might seem at first blush). Trust me. You want no part of Big Sis in a hoody.

Ask yourself where one lone white hispanic could hide in plain sight among an estimated 12 - 16 million other ones... THE BORDER DUMMY! The progressives have no desire to shut that whole vote machine area down.

You're welcome. Glad I could help.

Now in the unlikely event that Big Sis was sent to track and surveille me, let me just save her the trouble and fully disclose this "creepy ass cracka's" where-abouts for today. With the post church service forecast reaching 90+ degrees today, I no doubt will be in my backyard swimming pool - consuming an ice cold LaBatts Blue and reading from my Kindle. Please forward all my calls to the bouyant pool noodles.

After all, I believe it is the Fourth Amendment that states in part: "The right of the people to be secure in their persons, houses and swimming pools, against unreasonable searches and seizures of their beer and noodles shall not be violated.