I've been on blog break for a bit. The wife and I have since been BLESSED with the birth of our second granddaughter. Her older sister is about 19 months. As the father of 3 boys, I couldn't be happier with these two beautiful young ladies. I even know a lot of the songs in Moana by heart (though admittedly I might change the lyrics slightly... "I see what's happening here... You're face-to-face with grandpa and he's strange."

I only tell you this for context, as this midterm result has me thinking about this old cartoon. 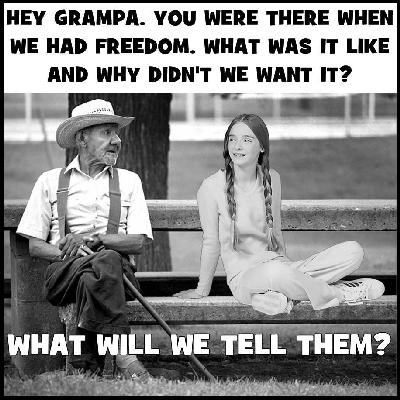 All day long yesterday, my Facebook feed was jammed with selfies of my FB "friends" posing with their "I VOTED" stickers. With few exceptions, these photos didn't give me warm fuzzies of camaraderie and fellowship - they made me cringe since I know their politics. "Great! Another leftist jackass or uneducated twit voted!," I would think. They pretend to celebrate the freedom to vote, while at the same time undermining the very foundations of our constitution that allow these votes to actually be counted. They vote in Venezuela. They vote in Russia. They vote in North Korea. In fact, it's mandatory under penalty of law and there is only one candidate.

So no, I am not happy these progressive leftist socialist jackasses voted. While I am not beating my chest or sitting in the road crying like these same snowflakes did the morning after Trump's election - only me at the prospect of crazy mumbling nancy wielding the gavel again. I'm just sad for my granddaughters and what kind of country will be left.

I had a dream last night. I was huddled in the back of a plane cruising level at 30,000 feet with several other passengers. The date was September 11, 2001. Terrorists had taken control of the cockpit and were at the controls while others guarded the front of the cabin with box cutters. One of the passengers received a call on their cell and the information received was devastating. As the passenger shared this information, it became clear that this was not a traditional hijacking. The plane would not be diverted to Cuba, nor would our release be negotiated. Regardless of the soothing lies and false promises from the terrorists that "all would be well" if we just cooperated, we were helpless passengers on a suicide run and we would not survive. Most sat there in shock at the news, some sobbing, some praying.

Then a young man in a baseball cap with eyes of focused intensity came forward and quietly laid out a plan to charge the cockpit. I don't recall his exact words, as my fading memory on this point is murky and elusive, as remembered dreams are want to be. I do recall, however, that his message was inspiring. While our odds were impossible, he made us understand that we still had choices. We could choose to bow to this tyranny by remaining quietly in our seats, thereby potentially buying us a little more time but solidifying our collective fates. Or we could leave the false and temporary safety of our foxhole to fight against this tyranny, and die if necessary, for ideals like "freedom" and "liberty".

My dream took a strange twist at this point, as visions passed before my like those old black and white newsreels. General Washington Crossing the Delaware... The battlefield at Gettysburg, filled with cannon smoke and cries of the dying... Heroes leaping into the cold water off the back of an amphibious troop carrier and racing toward the beaches of Normandy - the air filled with bullets and shrapnel thicker than a spring rainstorm.

And then instantly I was back in the plane. That's strange! Slightly more than half of the passengers have moved to the front of the plane and are dancing and laughing and chugging the miniature bottles of hootch pilfered from the galley with the terrorists. More free stuff is promised to them as long as they cooperate. Meanwhile, the party continues as the plane barrels on towards oblivion.

The young man in the baseball cap (I think his name was Todd) looked at me with those eyes of focused intensity and said, "....