Frankly, I think the thought engineers missed their mark with this oversize airport paperweight. Not that the not-so-hidden security spy camera isn't effective in alerting the closest TSA government soldier of a possible free-roaming free thinker who didn't have their useless paper mask pulled up over their nose. And the display screen appears to be broadcasting CNN in HD. 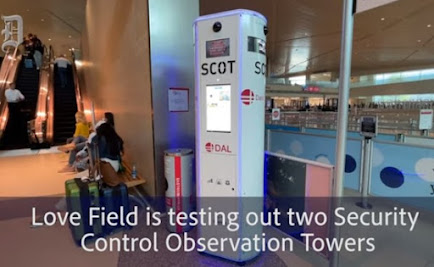 I just think the Lost in Space robot would have been more intimidating, with his flailing accordian arms and "WARNING, WARNING!" admonishments like he is in a robot sissy fight. They could have still used the lispy queer voice for a chilling prison yard feel.

In case you missed it, here is KAREN... I mean SCOT during happier times... Welcome to Dallath!

Earlier this week, a Judge voided the US mask mandate for travelers. Now what's an effiminate 7-foot tall gender-fluid, non-binary kiosk airport robot to do?

SCOT: What am I thuppothed to do now? What if there ith an atthathan traveling from Mithithippi with hith thupport thquirrel which ith infected with Covid!

BLADE: Well, you can't tell the assassin or his support squirrel to wear a mask.

BLADE: Somehow I don't think that word means what you think it means.

BLADE: Cheer up buddy. You still have that spy camera. Just watch for the red Trump hats. And you still have your display screen. Just broadcast those mindless vaccine propaganda commercials on an endless loop. That's still legal somehow...