This story made me sick to my stomach - Gendercide: China's shameful massacre of unborn girls means there will soon be 30m more men than women

Apparently it's not uncommon in communist China for beautiful baby girls to be left to die in nearby gutters, what with their "one child" policy, and given the fact that females are not afforded any value above chattel in their culture. These "mothers" are simply exerting their right to choose under legalized abortion, are they not?

"You are only a girl. You are spilt water."

Surely even the staunchest so-called "pro-choice" women in this country can no longer rationalize their barbaric views regarding abortion, can they? How could they denounce this massacre of their own gender and yet still condone the practice of infanticide in any form in this country?

The "choice" can't be any clearer. Either you embrace your neighbor's "unenumerated right" to murder their own child or you must accept the fact that abortion is an abomination in all cases.

...and the results are in. Feminazis can speak out of both sides of their piehole. 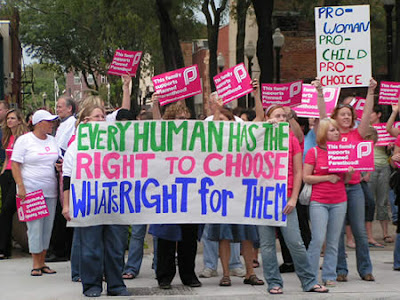 and the signs said...
* EVERY HUMAN HAS THE RIGHT TO CHOOSE WHAT'S RIGHT FOR THEM
* PRO-WOMAN PRO-CHILD PRO-CHOICE
* THIS FAMILY SUPPORTS PLANNED PARENTHOOD
so I tucked my hair up under my hat, and I went in to ask them why?

Sorry libs, you can't have your fetus and eat it too.

Liberalism really is a brain disorder. It is the only way I can see how they can justify their twisted belief system, and therefore you hold little chance of swaying a liberal to the right side of an issue.

It got me to thinking that logic and reasoning works just as well with a liberal as it does with a protective mother. That is meant to be a smooth segue into the following, which is really all I wanted to blog about today.

My older brother Greg likes to tell the story about when he was a teenager (17 or 18?) and wanted to go on a weekend bike trip (10-speeds, not Harleys) up north with some neighborhood buddies. Now brother Greg, being a bright yet devious teenager, knew that mother would have initial doubts about giving her approval, and so brother Greg formulated his strategy in advance. He wanted to ensure, through the sheer power of his logic, that she would be forced to acquiesce and let him go. Like a boxer who choreographs his moves before entering the ring, Greg felt he had the knockout punch, if it even came to that. You see, he knew the story of our father running away and jumping trains cross-country when he was but just 13-years-old. A little 'ol bike ride pales in comparison to this, and even mother couldn't argue the fact that her husband was a fine man no worse for wear.

Now I know I am drawing this out, and you no doubt are ahead of me when I tell you that our mother flatly rejected him at every turn. If this was in fact a boxing match, my brother's punches were sad and feeble efforts and mother's chin was made of iron.

Seeing that his jabs were ineffective against mom's rope-a-dope "just say no" coverup, he went for the "dad jumped trains as a boy" roundhouse uppercut, and asked how she could still say "no" in light of this new evidence. she blocked and countered with a devastating blow of "BECAUSE I SAID SO" one-punch knockout shiver.

Now whenever one of us was sent to the canvas in this fashion by mom rejecting our plea, we almost always falsely assumed she did so without prejudice, and interpretted her "BECAUSE I SAID SO" to mean "go ask your father".

So brother Greg goes to our dad and tells him what happened, asking him to intercede with mom. Since our father was not a crack user, he very rarely thought it prudent to overrule her. When brother Greg laid out his plea to our dad, his wise response has lived on in our family's history, and it is a lesson I have tried very hard to pass down to the next generation with my sons.

I shouldn't have to make the obvious distinction between the motivations of a protective mother to that of a protective liberal, so I won't. Consider it your homework assignment.
Posted by DaBlade at 11:36 AM