Woman hit with tacos during argument in Flint

Think outside the pun

FLINT, Michigan — A woman was struck with tacos Thursday after getting into an argument with her child's father in Flint, according to a police report.

The woman called police around 4 p.m. after the man began arguing with her while they sat inside her vehicle outside a residence.

During the argument, the man threw tacos at the woman before taking her black purse and exiting the vehicle. The man then allegedly grabbed a brick and threw it through the driver's side window before fleeing to an unknown location. 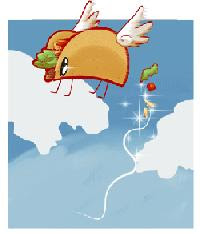 The Flying Taco
All I have to say is "FOOD FIGHT!!!" I thought tomorrow was "Taco Tuesday"?

Somehow, I don't think that throwing Tacos would slow down a charging Michael Moore, Flint's most famous native son.

"When they take this taco from my cold dead hand!"
When they outlaw tacos, only criminals will have tacos.

Hopefully they were soft tacos

Lettuce get to the meat of the matter here...

Never bring a taco to a chalupa fight.
Posted by DaBlade at 12:15 PM