Obama is not Hitler (especially when talking about their art)

Clarence Page takes issue with those mean-spirited Tea Party protesters in his latest column, A protest in need of a sane image. He cites the maniacally socialist web site of the Huffing-glue Post as his "source" for the "10 most offensive tea party signs". In case you missed it (and really, why WOULD you have read the Huffing-glue Post or Clarence Page?) here is the top five signs carried by, who Clarence calls "nut cases":

Downtown Chicago: "The American Taxpayers Are the Jews for Obama's Ovens."

Sacramento: "Our Tax [Dollar] $ Given to Hamas to Kill Christians, Jews and Americans, Thanks Mr. O."

Tampa: No words, just a color cartoon of President Barack Obama grabbing Uncle Sam from behind and slitting the old man's throat.

Chicago again: "Barack Hussein Obama, The New Face of Hitler"—on a large picture of Adolf Hitler with Obama's face bearing a Hitler-style mustache superimposed over the face of a picture of the original Hitler.

I admit that when I read these, I did not react with a Perez Hilton type hissy fit of astonishment. I was not offended. In fact, I really like Tampa's! That said, there were better signs - many of which I saw on Fox with their excellent Tea Party coverage - or I saw them on all of YOUR blogs I read to help keep my sanity (I know, it doesn't appear to be working :) While I have never been to a leftist hippie democrat marxist protest, I'm sure they never would have such OFFENSIVE signs as these rightwing extremists. *choke*

Clarence seems to take the most offense by the comparison between his beloved messiah-in-chief, Obama, to that of the original genocider-in-chief, Adolph Hitler.

PAGE: "By the way, I have a modest proposal: Can we declare a moratorium on the use of Hitler as a metaphor for anyone but Hitler? Hitler's in a class by himself. Let's not cheapen his horrors by overusing his memory."

He has a bit of a point. Regardless of what Mahmood Akmadeenadude thinks, Hitler is directly responsible for the holocaust and extermination of 6 million Jews. According to wiki, "If you hold Hitler responsible for every death in the European Theater of World War II, that makes him responsible for well over half of those who died in the war (at least 20-30 million deaths)."

Hitler is not in the so-called "pro-choice" democrats league here. 20-30 million is a lot of death, but Roe V. Wade can beat that with 50 million abortions. With his enthusiastic support and promotion of abortion, I don't believe it a stretch to hold Obama personally accountable for ALL 50 million. After all, Obama is in a position to promote life and make a real difference in the elimination of the scourge of abortion but instead, he promotes it. I agree that Obama is not Hitler, but I believe both will have a tough job explaining himself on judgement day.

In other Hitler news, did you hear that 13 paintings done by the famous butcher and part-time artist, Adolph Hitler, recently sold for EUR 100,000?


"They are hardly Picasso," quipped the auctioner. Maybe not, but I believe Adolph's works rank up there with another famous butcher and part-time artist, Jack "Dr. Death" Kevorkian.

You be the judge...
Hitler's "Killing Time Before Killing Jews"
(ok, I made that title up) 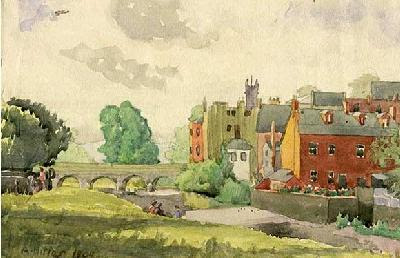 Kevorkian's "Nearer My God to Thee"
(his actual title!) 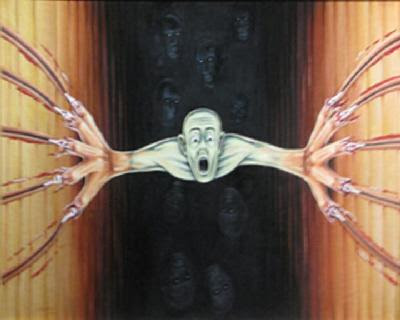 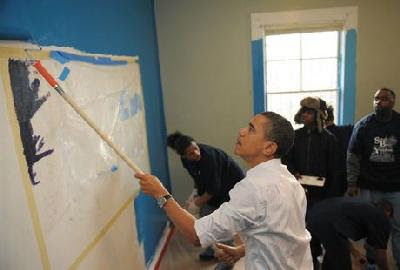