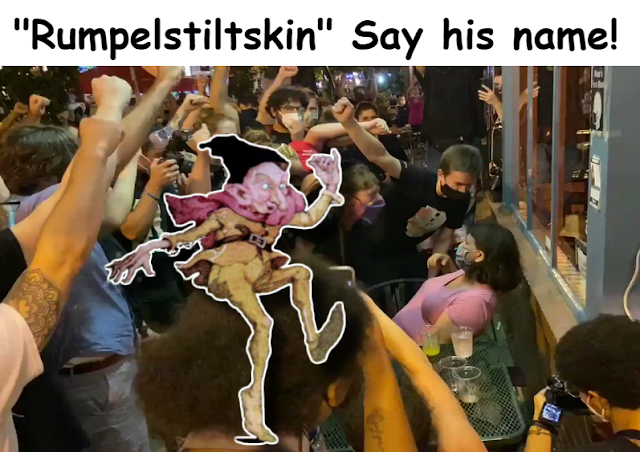 In the photo, White Woke college kids surround and confronts a white female diner outside a D.C. restaurant, chanting “White silence is violence!” and demanding she show solidarity for Rumpelstiltskin. Then her husband, Inigo Montoya, returns from the restroom and sees these White Woke college kids surrounding his wife, and promptly unholsters his concealed 9mm and says, "I do not think the word 'violence' means what you think it means."

In the fairy tale, Rumpelstiltskin is an imp-like creature who has the ability to spin worthless straw into gold, and trades the fruits of this skill in exchange for your first-born sons. Rumpelstiltskin is sort of like Bernie Sanders, except Bernie's spinning wheel only produces fool's gold. However, he'll take your children just the same.

Once upon a time, well-meaning Christian parents sent their baptized children off to college, assuming they would be taught authentic truths and critical thinking. These loving parent's hope was that those 4 years would be spent with fervent study, development and maturity, and that ultimately this time would provide a complimentary layer - like peanut butter on the bread - that worked in union with their core Christian and family values they worked to instill during the child's formative years.

But instead of these children getting instruction from competent purveyors of actual "Truth, Justice, and the American Way," they spent four long years being indoctrinated by tenured marxist, atheist professors who filled these kid's skulls with godless drivel and America-hating white guilt. While their parents assumed they were getting the aforementioned peanut butter in the classrooms, they were instead force-fed the shit sandwiches of progressivism where "up is down," and truth is scorned.

They were taught to accuse their parent's and those that still embraced objective reality as "science deniers," while they themselves claimed that SUVs and cow farts were destroying the planet, that gender was somehow a social construct, and - most sinister of all - that baby's lives in the womb didn't matter.

Some of the biggest lies, half-truths and falsehoods taught were on the topic of American history. While these kids had the absolute good fortune to have been born in the greatest country in the history of mankind and therefore be filled with gratitude - they instead learned that they should hate America, the genius founding fathers, the awe-inspiring Declaration of Independence and the Constitution of the United States.

Instead of falling to their knees in praise and thanks to God Almighty, they were taught by academia, the fake news media, Hollywood elitists and ignorant multi-million-dollar sports figures to kneel in disrespect for our flag and our country. They were filled with more lies that the country is systemically racist.

They made heroes out of drug-crazed criminals who were killed by police, stating that they were hunted by law enforcement because of the color of their skin and not because they were resisting arrest. They used these false-narratives as a catalyst to pillage, riot and burn down buildings and businesses in the democrat-led cities where they were given free reign to do so.

Meanwhile, since academia, the fake news media, Hollywood elitists and ignorant multi-million-dollar sports figures ignore the daily bloody massacre of blacks at the hands of other blacks in the big cities (not to mention the black genocide of abortion), they weren't given a second thought by these Woke White college kids either.

But why work so hard to fill these young skulls with so much hate and violence, falsely dressed up as compassion and enlightenment? Because that is the only way to dismantle the civil society built by a religious people of rugged individualism in a capitalist system and replace it with a socialist utopia. For if truth had been taught, then it would be recognized by any rational person that socialism in any form has never worked in the history of mankind. That socialism ultimately leads to rationing, misery, death and destruction at the hands of the all-powerful State.

Indeed, had there been truth in their instruction, then not even an inebriated, video-game-playing college kid would believe that putting the word "Democratic" in front of the ruinous word "socialism" would somehow transform it into a viable and desirable alternative.

"But health care is a human right!," they will chant. "Yah! Free health care! And while we're at it, free college!... and, and, and THIS flat screen TV! The store owner has insurance, after all! So don't throw that Molotov cocktail just yet... Free TVs!!"

Where will the money come from to pay for all this free stuff? I guess with the piles of cash accumulated after defunding the police and turning our cities into segmented Chaz-like strongholds comprised of White Woke college kids.

Or maybe they expect for the rest of us hardworking stiffs to spin them gold out of our blood, sweat and toil so it can be confiscated and fairly redistributed to the imp-like creature, "Rumpelstiltskin".

Will you say his name? 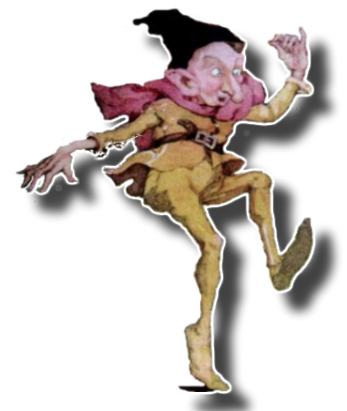