Brian Williams gets career on Target!

While a vigorous debate over Brian Williams' future is brewing as "NBC Nightly News", Williams has taken matters into his own hands. Last night he was spotted at a Target store in an out-of-the-way aisle in the toy section soliciting career advice from employees there. 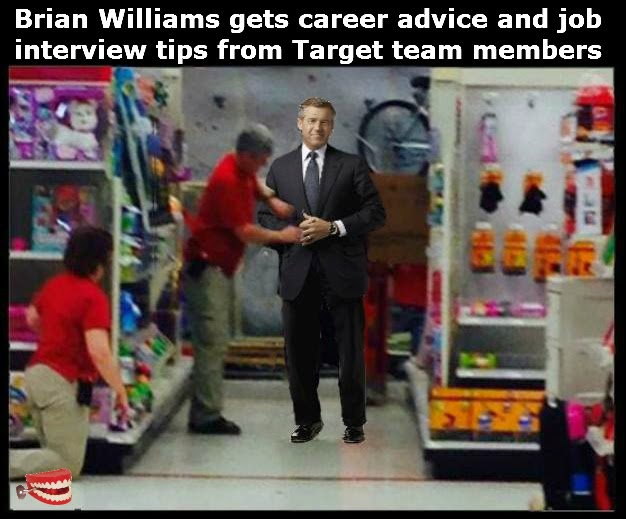 Last week, these same Target team members became a Twitter hit and internet sensation after helping a young teen who popped into their store in order to buy a clip-on tie for a job interview at a neighboring Chick-fil-A.

Since this story went viral, these Target employees have administered marriage counseling to various store patrons; helped local police in an ongoing murder investigation across town and helped a University professor grade a student's thesis.

Brian Williams is not the first celebrity to seek out their sage wisdom. They have helped President Obama formulate his latest budget, and it is rumored they were instrumental in finding Bruce Jenner (a/k/a "Jen Bruiser") some cute pumps IN HIS/HER SIZE!

It's all part of Target's latest marketing campaign.
“We want our guests to see and feel that when they shop at Target, they’re part of something bigger than a transaction... and not just trying to sell you something that can be found on store shelves,” said Jeff Jones, executive vice president and chief marketing officer.

Brian Williams was later spotted in a booth at a nearby fast food chain, one shirt tail untucked, stains on his clip-on tie and his normally well-coiffed hair in disarray and mumbling, "Winner, winner, Chick-fil-A dinner!"