President Trump has called it a "witch hunt". 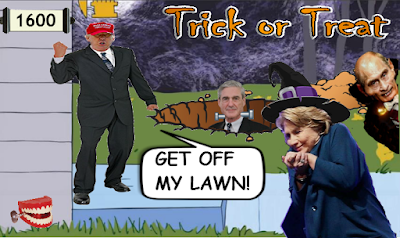 FrankenMueller's monster appears to be digging a fresh grave and looking for dirt in Trump's yard, but he's coming up empty with each scoop of the shovel. "I got a rock," he seems to be saying. FrankenMueller's monster also hates fire. "FIRE! FIRE! FIRE!," scream the GOP with their pitchforks and torches, calling for the monster's stitched head. However, the special prosecutor is a being of the undead and will therefore wreak as much havoc as possible before succumbing to the light of truth.

...but its actually Crooked Witch Hillary who knows where the bodies are buried, for it was her campaign and the DNC who planted them. Crooked Witch Hillary is wicked and desirous of the ruby red slippers of power. She was willing to stoop to anything and cast any dark spell to acquire them. Her flying monkeys in the media were willing to do her bidding at every turn. Alas, last November was like a cold bucket of water poored over her crooked and twisted head. She has been doing a slow melt ever since.

Meanwhile, Vlad the Pootie Poot watches from the sidelines and just laughs his evil laugh. Vlad would have much preferred that Crooked Witch Hillary had acquired the ruby red slippers of power, for it was her with Obamazombie and his "flexibility" that allowed Pootie Poot to stockpile our uranium in his castle's cellar. Still, he finds it humorous watching the flying media monkeys falsely accusing President Trump for Crooked Witch Hillary's crimes.

Lest ye are now full of despair (and those awesome mini Snickers bars you've raided from the trick-or-treat stash) All is not lost, for President Trump defends his domain with a pair of Crystal Balls and wooden stakes to fend off these undead creatures of the night.