The embassy just got 10 feet higher 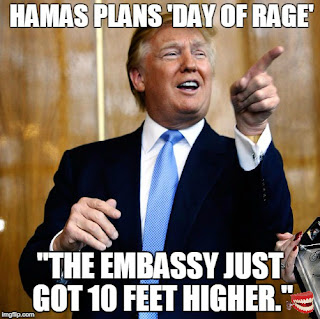 Trump to move our embassy to Israel’s capital in Jerusalem.

The capital of the Jewish people for a mere 4,000 years or so.

The arabs who call themselves 'Palestinians' (which is not really a thing) say they will withdraw from the peace talks. YIKKES! *WRINGS HANDS* *lip quiver* *sob*

The MSM agree that Trump has destroyed the peace process, hoping we will ignore the 100+ years of violence perpetuated by these same arabs.

TRUMP: "The embassy just got 10 feet higher."
In fact, let's put the embassy in that domed building on that rock. First, paint over that ugly gold - I'm thinking 'egg shell white' - and put up a neon TRUMP sign on top.