Blade: Today I have the pleasure of sitting down with Alexandria Ocasio-Cortez, the 14-year-old Latina upstart who recently defeated 10-year incumbent Joe Bag-o-donuts by an estimated vote tally of 116 to 80-something. Thank you for doing this - - may I call you Al? 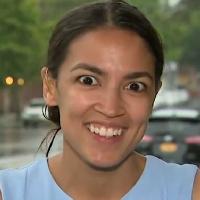 Alexandria: You must call me Alexandria Ocasio-Cortez, por favor, and roll your tongue on the Rrrr's.... And I am veintiocho años.

Blade: So Al, congrats on the narrow victory over that white guy in the uneducated and majority Hispanic New York's 14th Congressional District which includes parts of the Bronx and Queens - though most folks don't know where that is.

Alexandria: I personally believe that U.S. Americans are unable to do so because some people out there in our nation don’t have maps.

Blade: OK, let's talk policy then - What is this Democratic Socialism you so eloquently espouse? Free maps? Free college? Free health care? Free everything? AND THE POOR FOLKS IN THE BRONX ACTUALLY LIKE THE IDEA OF FREE STUFF?

Blade: Wait... your policy platform seems familiar. Some would accuse you of plagiarizing Miss South Carolina from the 2007 Miss Teen USA Pageant.

Blade: Well, you've convinced me. Now I see what all of the media, hollywood and late night hosts are so fired up about. You are the most brilliant mind to come out of the socialist democrat party this side of Bernie Sanders, Nancy Pelosi or Maxine Waters. And your googly eyes are somewhat endearing. Good luck to you. This is going to be entertaining to us flyover folks.
Posted by DaBlade at 8:36 AM