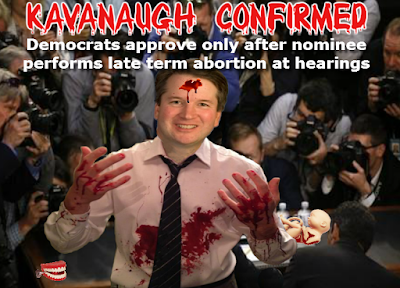 Chattering Teeth News - Brett M. Kavanaugh needed 51 votes to become the Supreme Court's next associate justice, and with Republicans holding a 51-49 majority in the Senate, it sounded like a slam dunk. However, with Arizona Sen. John McCain off on sick leave and with Susan Collins of Maine and Lisa Murkowski of Alaska uncomfortable with Kavanaugh's refusal to outright guarantee he would not restrict or outright overturn Roe v. Wade if given the chance, it was clear during the senate confirmation hearings that his nomination would go down in flames.

The democrats were always going to vote as a block against any of the president's picks, and now with the fake Republicans Collins and Murkowski, they held the 51 votes to Bork the jurist with the frat boy name. Kavanaugh had promised repeatedly during the spirited process to follow the law of judicial precedent as it related to the democrat's unholy sacrament of abortion rights, and even offered to change his frat boy first name to more palatable gender-neutral name of "Merrick" or "Barrack".

At first, Coach K believed he was making headway. That is until Dianne Feinstein accused him of putting a pube on her Coke can which motivated Elizabeth "Pocahontas" Warren to initiate her war dance in full Indian headdress regalia. It was clear to all in the chamber that Kavanaugh was no longer a viable nominee and instead was an unwanted tissue mass and just a clump of cells to the democrats.

Thinking quickly, Kavanaugh eyed a near-term pregnant democrat in the audience holding a NARAL sign. Figuring he had nothing to lose, he grabbed the women and threw her down on his desktop. The stunned senators watched in horror as Brett performed a flawless partial-birth extraction of the fetus. He the plunged his pocket knife into the back of the baby's skull before completely extracting it by grabbing a tiny ankle and thrusting it towards the jaw-gaping senators.

"Nobody can tell me what unspeakable macabre acts of horror I can do with my body," Kavanaugh eloquently stated through his maniacal giggle.

For a full 30 seconds, nothing could be heard on the senate floor except the echo of dripping blood from the now dead baby. And then the democrat side of the chamber erupted into raucous applause.

Kavanaugh was confirmed with 51 votes, getting the 49 democrat and independents as well as with the defections of Collins and Murkowski.