SHOCKING DISCOVERY IN MAR'S WATER! YOU WON'T BELIEVE WHAT SCIENTISTS ARE NOW SAYING!

CHATTERING TEETH NEWS - Last week, scientists announced the discovery of liquid water beneath the surface of Mars. Breaking news updates are now coming directly from an old Ham Radio in the basement bunker of the sprawling Chattering Teeth News complex. The same orbiter with ice-penetrating radar that discovered this liquid water NOW suggests that this water is COMPLETELY FILLED with ancient DISPOSABLE PLASTIC DRINKING STRAWS! 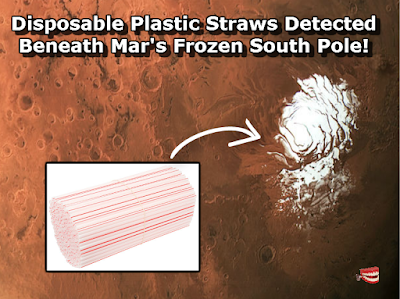 "The scientific community has always wondered why we couldn't find any evidence whatsoever of sea turtles meandering the surface of Mars. Now we have a working theory," stated a steely-eyed missile man who wished to remain anonymous.

Scientists still admit that they don't know the origin of these disposable plastic straws on Mars, but have long understood the propensity of these evil products of capitalism to migrate towards Earth's oceans and to attack the nasal passages of sea creatures.

Is it such a big leap to speculate that millions of years ago there might have been a vibrant Martian population living in harmony with herds of paddling sea turtles, and that eventually the Martians evolved opposable thumbs necessary to then invent Big Gulps and disposable plastic drinking straws - only for these straws to become sentient and invade the oceans in order to kill these turtles?

Is this lifeless planet a precursor for things to come for Earth unless we are able to break our addiction for these straws and instead use sippy cups?

Scientist also state that these recently discovered drinking straws are the traditional red and white striped variety and likely the reason for this planet's reddish hue.

I will keep you updated the minute I receive any more broadcasts on my honeybaked ham... at least until lunch time. After that, no promises that I will still have a working radio.