CHATTERING TEETH NEWS - This blog has secured an advance peek at the Mueller collusion report and his puppeteers are not going to be happy! One of our crack under-cover operatives (me) posed as a faux pizza delivery man and successfully gained entry to Special counsel Robert Mueller's residence and smuggled out 3 hours of surveillance footage taken from a hidden camera in his clip on bow tie. 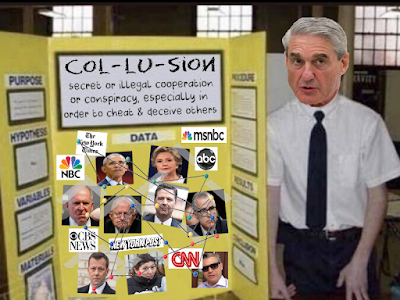 Mueller is visible in this footage practicing presenting his report in front of a mirror that he is rumored to be delivering for real to the new attorney general, William Barr, sometime in the coming week.  Mueller was supposed to have been working on this report these last two years, but this video of his report board makes it obvious he has just started it and is cramming to make deadline.

The special prosecutor had been secretly tasked by the former president and his upper-level political hacks in the F.B.I. and the D.O.J. in manufacturing evidence against the current President Trump in order to set the coup table for his eventual overthrow and disenfranchisement of his almost 65 million voters. Unfortunately for them, Bob Mueller is not real bright and consequently got his signals crossed, as evidenced by his report board showing the actual collusion in the last election.

Mueller's report suspiciously resembles a recycled elementary child's science fair project, and even comes with a paper mache' volcano fashioned in the horrifying likeness of Hillary Clinton, as she spews eruptions of baking soda and vinegar from her prodigious pie hole. Mueller also was experimenting giving his report in black face and wearing a noose for sympathetic effect.