Trump in cars getting Lunch 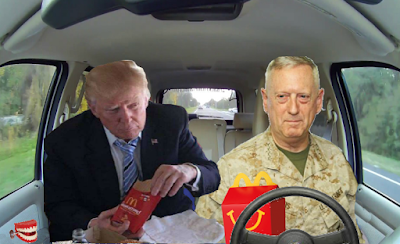 BLOG NARRATOR: Ever since he resigned as Secretary of Defense last December, James 'Mad Dog' Mattis has been President Trump's wheelman and impromptu valet, whether he needs a driver for a getaway golf round and weekend getaway in Mar-a-Lago or for late-night fourth meal runs. Let's peek in...

Trump: If he wants me to bring him a Happy Meal, tell him he's too late. But we will be going through the drive thru at Chick-fil-A... 12 piece nuggets?

Mad Dog: He says there is intelligence that Iran is Threatening American Interests.

Trump: Put him on speaker.

Bolton: Mr President, there is not a pallet of cash large enough for me to get on the current "speaker".  Speaking of that, what do you want to do? The former president would bow repeatedly and load pallets of cash and send to the Iranian regime. Or choice B would entail deploying the USS Abraham Lincoln Carrier Strike Group and a bomber task force to the U.S. Central Command region for a little more "flexibility".

BLOG NARRATOR: WILL TRUMP PULL AN OBAMA AND SURRENDER? WILL TRUMP ALLOW IRAN TO CAPTURE US OUR SAILORS AND HOLD THEM PRISONER TO HUMILIATE THIS PRESIDENT LIKE THEY DID TO THE LAST ONE? WILL TRUMP IGNORE IRAN'S CULPABILITY FOR HAMAS ROCKET ATTACKS INTO ISRAEL AND IN FACT BLAME ISRAEL LIKE THE DEMOCRATS DO? WILL TRUMP OPT FOR NUGGETS OR A SPICY CHICKEN SANDWICH AT CHI-FIL-A?