The Curse of the Black-Robed Swine 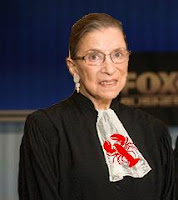 ...Who flushed? Many suspected Justice Sonia Sotomayor, as it was the day after Cinco de Mayo Taco Tuesday. Others suspected Justice Clarence Thomas, who is known to have to rope off access to the toilet with yellow caution tape after a lunch break visit to Five Guys. But no, the truth is much more macabre... This spring, don't miss The Curse of the Black-Robed Swine.

Chattering Teeth News - This blog has learned that the Pirates of the Caribbean film franchise is coming out with a surprise installment that should be a good bookend to this once popular swashbuckling series. The first movie in 2003 - before a long line of sequels (nobody knows exactly how many films were actually made) - was titled, The Curse of the Black Pearl. This final movie is titled, The Curse of the Black-Robed Swine.  Instead of starring Johnny Depp as the effeminate pirate Jack Sparrow, the leading role goes to the frail yet seemingly indestructible old crone, Supreme Court Justice Ruth Bader Ginsburg (RBG).

In "Pearl", the pirate crew was cursed after finding the Treasure of Cortés, doomed to live forever as the undead, the moonlight eerily transforming them into living skeletons.

In "Swine", the Supreme Court is cursed after the 1973 Roe v. Wade decision, cursing all unrepentant perpetrators who advocated for this crime against humanity, past and present. The court's most vocal current advocate, RBG, is doomed to walk the earth as the undead - much to the delight of the evil progressive left.

Ruth Bader Ginsburg is now approximately 187 years old. She has had cancer numerous times, suffered falls that left her with fractures, and now is reportedly having gallbladder issues. How does she recover? Could it be her workouts reminiscent of Obama's power lifting workouts? Or is there something more sinister going on here? 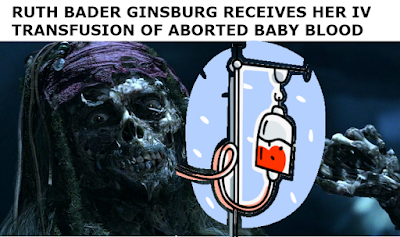 Who flushed? Could RBG have had to flush the POCs from her latest 'donor'?

"Look! The moonlight shows what I really am. I am not among the living, and so I cannot die. But neither am I dead. For too long I've been parched of thirst and unable to quench it. Too long I've been starving to death and haven't died. I feel nothing. Not the wind on my face, nor the spray of the sea... You best start believing in ghost stories, Chief Roberts. You're in one!" - RBG