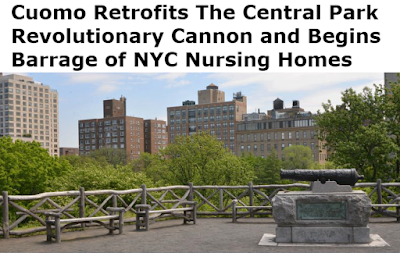 Chattering Teeth news - Gov. Andrew Cuomo, D-N.Y. has been widely criticized by the partisan right for sending elderly COVID-19 positive patients into the city's nursing homes, causing the spread of the coronavirus and 4,800 deaths.

But Gov. Cuomo is sly like a fox, as he has had the Central Park Revolutionary War Cannon refurbished and fully loaded with 800 grams of live gunpowder, cotton wadding and a cannon ball. Cuomo began a barrage of cannon fire and began targeting these hotspots early Tuesday evening.

MSNBC's Stephanie Ruhle now getting slammed for her 'softball interview' with Cuomo amid the 'cannonball run' nursing home controversy.

“While I have you, you have been criticized for your comments about nursing homes. Some people say you did not act quickly enough, too little, too late. What is your response to that criticism?” the MSNBC anchor asked.

"I’m getting criticized now for doing too much," Cuomo responded. "We will have lost many Americans in this, but the only solace we’re going to be able to take is we can say we did everything we could in flattening the city skyline curve where this feeding frenzy exists." 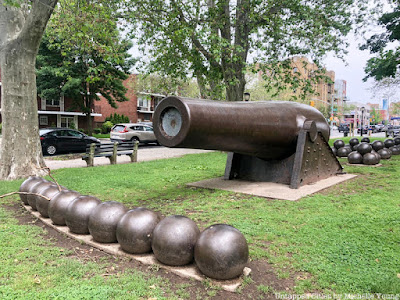 PICTURED: Located at Fourth Avenue and 101st Street in Brooklyn, the Fort Hamilton Rodman Gun is said to soon be operational and used if any newly opened businesses or daycare centers begin exhibiting signs of a second curve.

"Besides, its just a bunch of old people. None of us democrats care about them," Cuomo continued. "We've isolated the contagion and are now taking systematic steps to eradicate this virus."

The governor addressed a band of useful idiot reporters and said "nobody" should be prosecuted for the those who died, noting that "older people" were most vulnerable in this cannon ball assault on the virus. 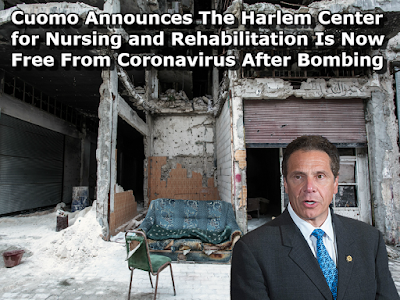 Pictured: Gov Cuomo visits the site of where the Harlem Center for Nursing and Rehabilitation once stood and proudly announced it was "now free of the virus."
Posted by DaBlade at 8:00 PM