Not a Good Year for this elk

A trail camera recently recorded this elk with a tire necklace in the wild southwest of Denver. Officials believe it's the same elk that was spotted through a scope a year ago doing donuts in a nearby field. The elk appears no worse for wear, though the tread is getting thin, as elk can easily walk 7 to 10 miles a day. Officials would like to catch him and remove the tire, although he is a youngster and is nowhere near retirement. 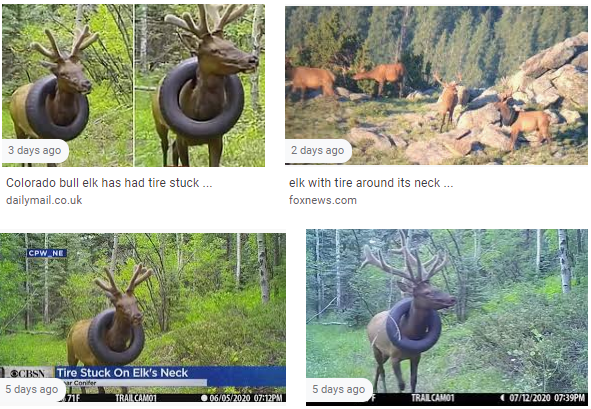 Residents are being asked to search for his tracks by looking for a symmetric tread pattern indicating extra wear on the sidewall. By this time, he may have picked up a screw.

Experts say the best chance of finding and tranquilizing the elk is during rut season. Rut season must be what we refer to as pothole season in these parts.

This can't end well for the poor elk. It seems like every time concerned humans try to help an animal... I always think of the seal that was cleaned up after an oil spill and finally released into the jaws of a waiting Orca to the horror of the gender-confused marine biologists on the shoreline.

Here is my prediction for the poor elk, if it is captured and the tire removed. 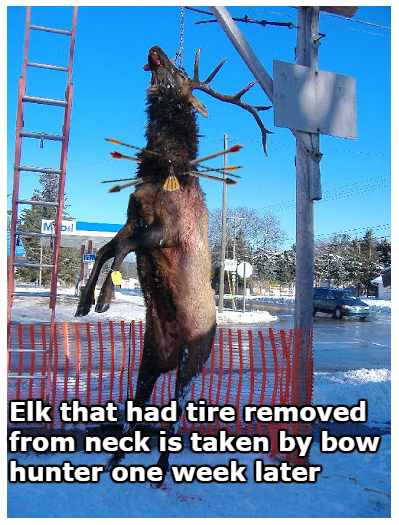 At least he will soon be joining Harambe, Cecil and Pedals the bear in animal heaven.