Awesome news. Sheriff initiating $1 million dollar hotline encouraging Floridians to report their neighbors whom they suspect might hate the "guv'ment".


Some day in the not-so-distant future, this may be viewed as a significant turning point event. It may even be the needed tonic to reinvigorate the movie franchise Smokey and the Bandit. I can almost see it now... 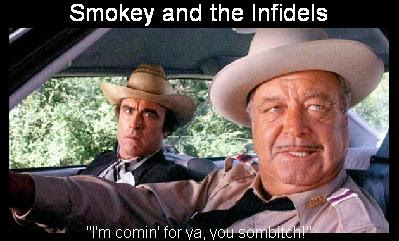 NEIGHBOR: Yah, I think I got one of dem Tea Party fellas next door. I heard him bragging that he had one of dem Bible thingys and a loaded weapon in his home, and even some bottles of something called "anti- bacterial soap," whatever the Bush that is. I even heard him insult the prophet, peace be unto him.

OPERATOR: We'll send the Civilian Security Force right away!
Posted by DaBlade at 7:55 AM