Dr Death in a van down by the river

I have never watched Ghost Adventures on the Travel Channel, but that may be about to change. That's because the show's host and lead paranormal investigator, Zak Bagans (any relation to Bilbo?) just bought an old 1968 Volkswagen "assisted suicide" van that was used by Jack "Dr. Death" Kevorkian.

Rick Harrison of Pawn Stars is right. You never know what is going to come through that door...


Southfield — A pawn shop owner has sold an old Volkswagen van that was used by assisted suicide advocate Jack Kevorkian...
Kevorkian sparked the national right-to-die debate in the 1990s with a homemade suicide machine that ended the lives of about 130 people. He helped people die in their homes, motels and in the back of the 1968 van. Kevorkian died in 2011 at age 83. He spent eight years in prison for second-degree murder after “60 Minutes” aired a video of him giving a lethal injection to a man in 1998.


Zak Bagans be like, "We wants it, we needs it. Must have the precious."

I am going out on a limb here and guessing that Zak did not buy this van for the gas mileage or the custom original blood-stained upholstery... (ACTUAL PHOTO OF INTERIOR) 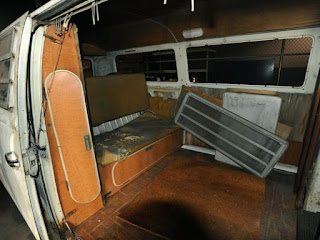 My guess is that Zak plans on using his "ghost channeling" skills in an attempt to contact Dr. Death (and/or his victims) in the back of his creepy mystery machine. (NOT ACTUAL PHOTOS OF EXTERIOR) 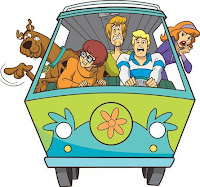 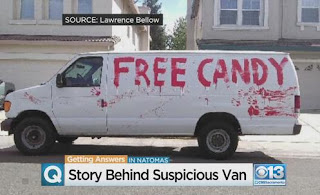 I for one am curious what Jack now has to say, and whether Hitler and he are best butt buddies in the sh*t shoveling pits.

Many of you (none of you) probably remember my fake interview with Jack "Dr Death" Kevorkian back in 2008 after he announced a congressional run. I'm guessing most of you have it bookmarked in your favs,
clawed at your eyesbut for the rest of you... here is an excerpt with Dr. Death explaining how his new "Vote and/or Die" voting machine invention works. 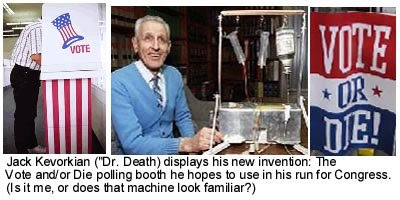 Jack received 2.6% of the 2008 vote in his bid for Michigan's 9th congressional district. Thankfully, he never received a patent for his invention (or by my math, Bloomfield Hills would have lost 97.4% of their voters)
Posted by DaBlade at 9:26 AM