The economy is crippled; there is more than $200 Trillion in unfunded liabilities; about one hundred million Americans no longer work; illegals are flowing over our open borders; Planned Parenthood continues to murder and dissect human babies; ISIS is on the march and chopping heads; Iran is on the verge of acquiring nuclear weapons and assuring WWIII; Cops in this country are being executed almost daily as a result of the president's race-baiting hate speech... so what did our fearless leader do yesterday?

Americans all across the country let out their breath in a collective sigh of relief when they learned President Obama finally took on an issue that really mattered by re-naming some mountain in Alaska. 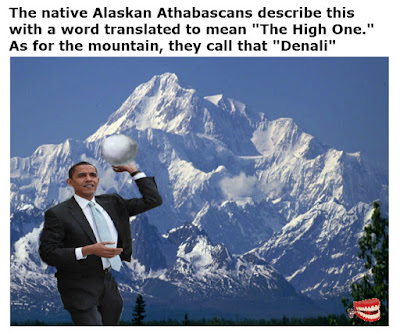 No sooner did Obama rename Mt. McKinley to 'Denali' during his Alaska trip focusing on climate change, Chattering Teeth News now learns that obama may be retracting that executive order before the ink even dries.

OBAMA: Denali? I thought they said "Da Nelly". As in Nelly the rapper. You know... so "Hot In Herre"?


I mean, what better theme song for my BullSh*t Global Warming agenda then that? (obama starts singing) "Its gettin hot in here ... So take off all your clothes."

NELLY: So whatupdoh, B? You naming me after that mountain, or what?

OBAMA: My advisors did tell me that the Athabascan tribe's word for that mountain translated to mean "the high one". Naturally, I thought of you, my choom bro, Da Nelly. *obama takes hit of bong*

In other Alaska news, the president has also re-named the capital city of Juneau to "NoJews".
Posted by DaBlade at 8:13 AM