President Obama wants to change the name of Mt. McKinley to Denali after more than 100 years. Great insult to Ohio. I will change back!

However, after having slept on the problem, he instead built a new 1620-Story skyscraper next to the mountain. The new Mt. McKinley Casino & Resort becomes the world's tallest building by a factor of about ten, and standing at 30,250 feet tall, is 12 foot taller than the mountain Obama just re-named Denali. 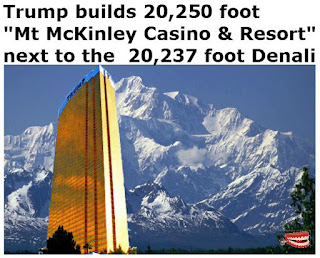 "Now maybe Boehner will stop sobbing," said Trump.
Posted by DaBlade at 8:07 AM