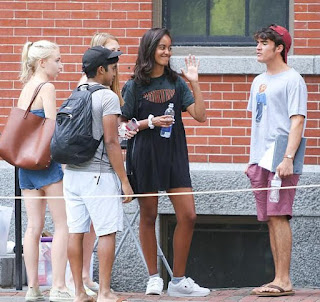 OBAMA: Number one, we will not talk about numbers of tutors or marxists professors we will employ for furthering Malia's indoctrination. She's not the brightest bulb, so who knows.

Secondly, I've said it many times how counterproductive it is for students to announce the dates they intend to begin or end college. Malia took a gap year after high school - and let's face it, the odds are as long as her substantial forehead that she will be literate in just 4 years. It will depend on conditions on the campus grounds, not arbitrary timetables to graduate.

Lastly, Michelle and I are committed to working with the Harvard Administration, but our support is not a blank check. We expect Malia to be a good little communist, not that Harvard should find that a very difficult task.

Obama said bluntly that Malia was "not education-building again." To finish the point, he added: "She will be killing brain cells," just like her her parents did.

And little Malia and her new marxist democrat socialist classmate friends took off looking for campus statues to vandalize, as Barack and Michelle wept in pride.

Bonus question... what America-hating slogan is on Malia's designer T?
Posted by DaBlade at 9:31 AM