FLINT TOWN - Netflix Original (A convoluted review by this Flintoid) 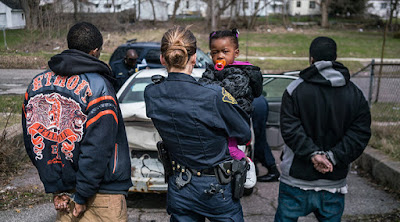 The wife and I just finished watching the recently released 8th and final episode of the docu-series, Flint Town on Netflix last night. I give it 8 spent bullet casings out of 9. Why not out of an even 10? Because my M&P Shield 9mm extended clip is only single stack for low profile, so 8+1 in the chamber. That's plenty of rounds to rate a show. 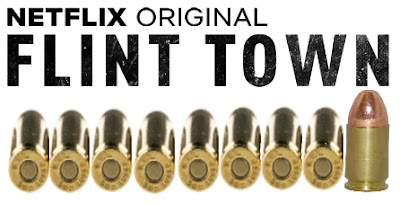 Since the wife and I consider ourselves 'Flintoids' born and raised, we may have a slight bias. Also, I was very close to following in my father's footsteps and becoming a Flint cop when I applied for one of about a dozen advertised positions at the tender age of 23 yrs old in 1984. When I told the chief during my interview why I wanted to be a cop, he then asked me, "well then why did you just finish college with a degree in business?" I didn't get the job when I couldn't explain this apparent contradiction. I was hired full time shortly thereafter by the local newspaper as a district manager. As I watched Flint Town, I couldn't help but think, "what if" and how different my life would have turned. I'm happy how that turned out (I think) but I know I would have been a good cop.

Flint Town is chock full of familiar faces and places. During one of the earlier episodes involving a crime scene at The Evergreen Regency apartments, I was reminded of the numerous times between the mid-80's and 90's of delivering newspapers and recruiting for new route carriers in that complex. Trust me, it was a violent place even back then and I could never seem to keep a good carrier on that route. This was back when the weekday newspapers were delivered in the afternoon, so it was always a little crowded between the apartment buildings as I walked passed with a bag of newspapers and wearing a goofy non-threatening grin on my face in hopes of avoiding conflict. By the way, it is considered bad luck to step on a body chalk line or to walk under yellow police tape - just sayin'.

"Who wants to earn some money by delivering this route, collecting from half the customers who will actually answer their door and pay for their subscription, and not paying me next week when I stop by your apartment in an attempt to collect the weekly wholesale bill from you and end up having to take over the deliveries myself again until I can find another carrier?," I never actually asked (but thought).

But I digress. I will do that on occasion, as this is my review. Now back to the show...

I stated that Flint Town is also chock full of familiar faces. Most notable is Officer Bridgette, the daughter of an ex-coworker from the newspaper, and in my opinion is the star of the show. Her relationship with a fellow officer is also featured and a thread throughout. The juxtaposition of a beautiful, young woman - albeit tough - against the mean streets of Flint is very compelling.

Flint Town is not just a redux of old COPS shows (Bad boys, bad boys Whatcha gonna do, whatcha gonna do When they come for you) with a collection of chases, arrests, blood, bodies and murder (and shirtless perps with pants at their knees) - though there is much of that. Instead, we are shown the city through the eyes of a collection of Police officers - from veterans on the force, to newly hired rookies like Dion and his mother.

The series deals mostly with the woefully understaffed police department as it relates to the community and the politicians, with an overlay of a violent urban environment and the longstanding water crisis in Flint. If that's not enough to digest, the series is shot during the calendar year of 2016 when police officers increasingly became targets of ambush and execution, including the Dallas sniper who killed 5 officers. 2016 just so happens to also be a very important election year, both locally (police funding on the ballot) as well as nationally with the presidential election. We get the officer's reactions to all of this. Not surprisingly, the department is a microcosm of society as a whole, and mostly separates by racial lines on these issues.

As a side note (told you) My wife was selected for jury duty last year in a week-long trial involving a murder occuring in 2016. I was watching for any mention of this crime, either through the occasional scanner and 911 calls, news broadcast or crime scene video. It didn't make the cut.

Interspersed are cut scenes of interviews with some of the officer's spouses, and the mix of pride and worry that goes with that territory. I am reminded of seeing my mother (during my childhood in the 60's and 70's) sitting at the kitchen table with only the glow of her cigarette to illuminate her worried face as she listened to the police scanner sitting on the counter next to the toaster for updates after my dad was called in to work due to the latest homicide. I never really worried because I knew my father was bullet-proof.

IN CONCLUSION
This Netflix original series was very well done. The images were both simultaneously beautiful and repugnant. One minute, you as the viewer are watching a pretty TV personality with a news update, the next scene might be a blazing vacant house fire or the scene of another shooting. I also found the politics between the police chief, the mayor and city council interesting.


I've said it before and I'll say it again:
Flint, like all cities, has always had a violent under-belly. There were plenty of violent criminals for my father to apprehend back in the 60s and 70s when GM still employed 80,000 or so folks here. I remember waking up to a ringing telephone in the middle of the night on many occasions in my youth, each call announcing yet another murder requiring my father's 38 and trench coat. The premise that the violence was born from GM leaving is false. Case in point, the picture (below) of my dad nonchalantly leaving a murder scene circa 1971. 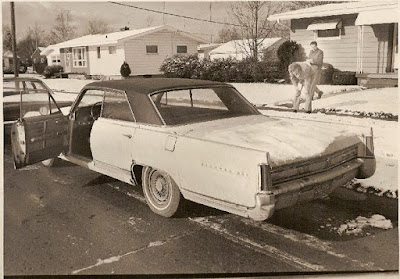 I guess what I'm trying to say is that if cities were amusement park rides, you can keep your carousel. Give me the exhilarating experience of the roller coaster, as it crests the apex moments before a hair-raising plunge. Or the unexpected twists and turns and gravity-defying loops. Oh sure, it will make you vomit occasionally, but you can't make an omelette without cracking some eggs. And with that, I'll leave you to your breakfast, as I think I hear my crack dealer at the door.

I don't know if this is true, but I heard Netflix was interested in picking up another season but was rejected by the chief and/or mayor, who were upset that Netflix would not comply with their request to delete a few scenes they found objectionable from this original 8 episodes. If true, that's too bad. I would have definitely tuned in for that. 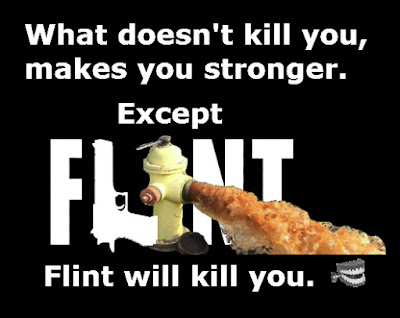 Other Flint posts I like...
Flintown - South Side Style

Snyder Sends Emergency Water to Flint in Old Artillery Shells and Paint Cans
Posted by DaBlade at 9:51 AM