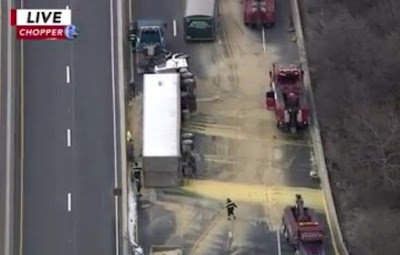 So how DOES the King of Prussia like his eggs?

This is no yoke. A semi-truck carrying liquid egg yolk turned over-easy on a Pennsylvania highway yesterday, causing emergency response to border scramble to the scene.

Whether the driver was Pickled, Poached or just Deviled, we may never know eggsactly, but he was heard slurring that the, "quiche were still in the eggnition... urrrp."

We also don't know if the roads were greasy, but the driver was thought to be cooking his way to the Shell station.