Will the free-falling 8.5 ton Chinese space station crash into lower Michigan? Experts say that the state falls among 'the highest probability' 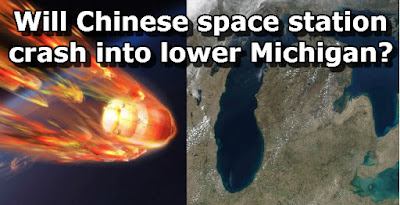 While there is said to be a high margin of error in this prediction (give or take a week and on the opposite side of the planet), I am convinced that the exact time of this crash landing will be high noon on April 3rd, and the crash site will be in my back yard.

So-called 'experts' at Aerospace Corp would have me believe that, "the probability that a specific person will be struck by Tiangong-1 debris is about one million times smaller than the odds of winning the Powerball jackpot." I bet these dudes don't live in mid-Michigan. And I've never won the lottery, which by my calculation virtually guarantees I'll be struck.

Another stated, 'Only one person has ever been recorded as being hit by a piece of space debris and, fortunately, she was not injured.' I bet she would have rather won the lottery, and I assume this crashed satellite was not full of 'highly toxic' chemicals. Of course, I've been drinking Flint water all my life, so a little hydrazine in my swimming pool doesn't scare me. Bring it on Xi Jinping!

Some might accuse me of being a narcissistic pessimist by assuming the falling Chinese space station known as the 'heavenly palace' is targeting me. I don't consider myself a pessimist, but a paranoid realist. The glass is neither half empty nor half full... but chock full of lead, coliform bacteria and other toxic disease-carrying pathogens.

Besides, the lower peninsula of the great state of Michigan resembles a 277 x 195-mile catcher's mitt from space, and opening day is less than 3 weeks away. Where else would Xi try to send a fastball by us?

But I have a plan. It's been awhile since I mailed a letter of such import that it shaped humanity for the better, but I believe now is the time once again...

Dear Elon,
May I call you mister Musk? Sir, I know you are a busy dude building rockets and batteries and digging tunnels and all, but I have the most most urgent need for the use of your car. Specifically, that Tesla Roadster that your boy Starman is tooling around the solar system in...

and the rest, as they say, will be history. 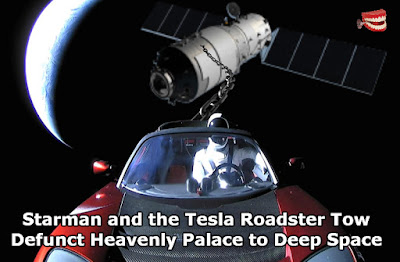