National school walkout: What you need to know

If you're a student in high school and are planning to take part in the National School Walkout today, there is something you really ought to know. Today's date is March 14th and has always been known as Pi Day. What is a Pi Day? I'm not sure, but I think it has something to do with math.

Perhaps more frightening than that is the fact that the symbol for Pi resembles a Tec 9 pistol with a banana clip, and 'guns bad'. 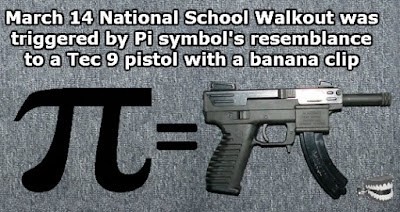 I thought we had finally abolished all math symbols after that student in Louisanna caused such a ruckus after noticing that the square root symbol resembled a gun. Apparently not. The struggle against math and its evil symbols continues. 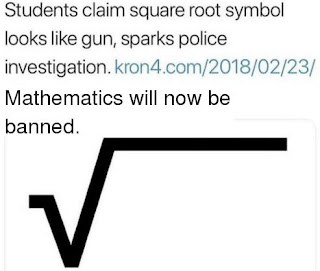 Listen, I have no problem with young folks wanting to honor those killed in the massacre at the Parkland high school earlier this year, nor  protesting gun violence. But the way you are going about this is 'Bass Aackwards'. If you want to honor those students, do something they no longer can by staying in class until the final bell. And you are against gun violence? GREAT! Then stand up for the 2ND Amendment and call for an end to these ridiculous so-called 'gun-free zones'.

What exactly is a gun-free zone? As President Trump calls them, they are “candy for bad people”. Does anyone really believe that putting up a sign will stop a mentally disturbed individual? That doesn't even work for the bathrooms at Target. 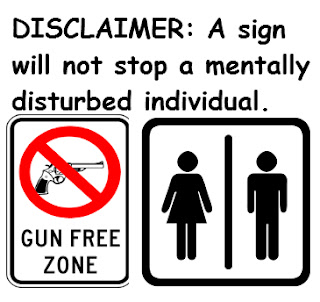 So what if the students walk out of school today wearing orange and calling for gun control? I certainly won't judge them harshly. If I were a student today, I'd probably join them for the same wrong reasons. That's just part of being young. It is only through age and experience that one can hope to shed the chains of indoctrination forged by our public school system.

Instead, I blame the adults from my generation and prior ones who have created or allowed this environment of ignorance to take root. Just look at what we do to our kids after high school. We send them off to colleges and universities only to come out four short years later as marxists or socialists who hate our country's founding principles and reject their own faith. Their new 'belief' system is reinforced by their only source of news between CNN, twitter and Jimmy Kimmel.

SO, IN CONCLUSION:
*Stay in school.

*Question everything - Except your 'gender'. Check your plumbing if you're still confused. It's one or the other and not a multiple choice.

IN OTHER NEWS:
McDonald's has done it again. Last week, participating 'Virtue Signalling' restaurants flipped their arches upside down in honor of International Women's Day. Today, they have flipped it on its side to honor Albert Einstein, born On March 14, 1879. Einstein is best known for his wild white mane and maybe some math stuff I think. Apparently, McDonalds did not get the memo regarding the new math-free zones. 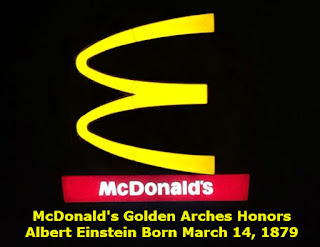 More on Pi Day, a day set aside by math nerds who love a number a smidgen over '3' with an infinitely huge tail (no, not Kim Kardashian's IQ).
Posted by DaBlade at 7:53 AM